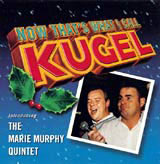 Kugel is hoping to storm the album charts with a collection of Christmas classics featuring the angelic voices of the consultancy’s staff. Named ‘Now that’s what I call Kugel’, the CD includes a professional singer and band, plus the rest of the ‘absolutely marvellous’ Kugel choir. Obviously they had already got into the Christmas mood when they were producing the album sleeve, as all of the songs were in the wrong order. Founding partner Nick Hughes puts the blame on ‘festive spirit’ for the mistake.

Time and a place

Learn about design before DTP packages

Welcome to my vision of package designer utopia…