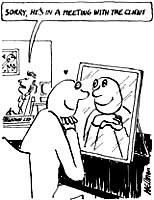 January – the month of fervent resolutions and grand plans for the year ahead. If there’s one thing I would like to see the design business do more of in 2000 it’s to use its energy, expertise and creativity in the pursuit of entrepreneurial projects.

Before we go on I should make it clear that I am in no way belittling the practice of working for clients, quite the reverse in fact. Design work created for others can be exceptionally valuable and fulfilling, and creating and running your own design business is in itself an entrepreneurial adventure. It’s the fact that so few people in the industry try using their talents except on behalf of others that I find odd.

This applies less to product designers, who inhabit an entrepreneurial climate from early in their careers, and more to graphic designers. Whenever I look around at the graphic excellence produced for commercial organisations it makes me wonder why, for example, so few brand packaging designers ever attempt to develop their own range of products. And why so few magazine designers have created their own titles. Why don’t more book designers establish their own imprints? Why don’t more poster designers create and sell their personal work? And why don’t more corporate identity experts put their money where their mouth is and draw other experts together to create a non-design venture of their own?

Of course, there are examples of designers doing these very things. Take books. One of the best recent examples is Quentin Newark of Atelier Works, who turned lessons learnt while researching a job for the Ministry of Defence into a superb consumer book called Camouflage. It was published to much acclaim here and is about to hit the shelves in Japan. Buoyed by this success, Newark is now forming an innovative new publishing venture called Eye Think.

Take magazines. Titles like Dazed and Confused and Wallpaper show that creative individuals can make and run a successful commercial magazine.

Take the Web. Edesigns.co.uk, set up in December 1999 by a creative director who saw huge potential for a company offering visually branded emails.

And in case you’re wondering if I practice what I preach; alongside my work for clients I’m also in the middle of creating my own consumer brand through activities in publishing, merchandising and the Web.

So, why doesn’t this kind of thing happen more often? Well, launching your own venture can be risky, demanding, unsettling and difficult. It’s hardly surprising that many designers simply don’t want that grief in their life. Others might also point out that they entered the industry because they wanted to design, not spend time convincing a nylon suited bank manager to give them funds for a venture that might not even work. Others might also modestly point out that they simply don’t have much commercial nous. All fair enough.

But it’s undeniable that there are plenty of people in the industry who’d be liberated by the challenges and opportunities presented by creating something that they themselves owned and controlled (designers do, after all, love to control things). And plenty of others will blithely advise their clients on far-reaching business matters – surely they believe in the value of their own thinking enough to pursue it?

Perhaps a certain approach to client service should take some blame here. In many studios the judgement of the client is elevated to an absolute. In these environments something is only worthwhile if a client “approves” it. This might not be the client’s fault, but it all smacks of “the man from Del Monte says ‘yes!'”. No wonder so many designers hate “the client” – the poor little creative has ended up as disempowered as those poor Third World orange growers, and instead of being sympathetic to the needs and concerns of the client, they end up throwing creative tantrums.

This – along with the excitement and the potential rewards, of course – is why I think the pursuit of self-owned projects is so valuable. Every creative person I know who’s done something entrepreneurial has developed both greater confidence in their own judgement and a much more sympathetic understanding of the client position. Indeed, one friend tried to launch a highly bespoke brand of biscuits; he failed, but said it’s the best thing he’s ever done in terms of improving himself as a packaging designer.

Perhaps it’s time for talented creative people with a bit of commercial nous to embrace the opportunities (and the risks) that self-owned projects offer, even if it’s on a small scale. If that’s too scary, you could always make 2000 the year you gave up coffee.