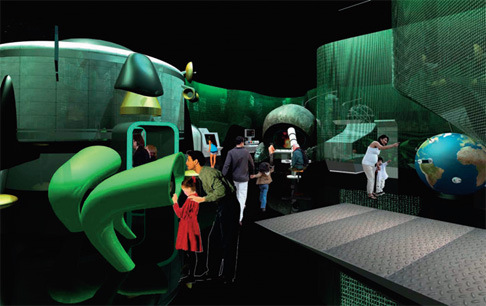 Met Studio has been commissioned to design three major galleries for the new Ningbo Science Exploration Centre in China.

Met Studio was appointed to work on three of the centre’s six galleries following a global competition in summer 2009. The consultancy’s London and Hong Kong offices will work together on the project.

The three other galleries will be designed by US group West Office, Japanese consultancy Tanseisha and Chinese group U-Joint.

Met Studio’s London team is designing the Universe and Harmonious Home galleries under the direction of design director Lloyd Hicks, while the Hong Kong team is overseeing the Ocean gallery under design director Neil Williams.

Hicks says, ’They were quite elaborate briefs. The client talked a lot about the cultural values of the galleries and the major content points it had to get across, but we’ve had to develop a lot of the content.’

He adds, ’The client wants something completely original, so it’s a huge task. You need to prove yourself all the way through.’

The Universe gallery (concept pictured) will see a huge projection of the solar system on the gallery floor, Wii-style games and a ’bungee walk’. The Harmonious Home gallery will include an interactive ’impact wall’, enabling viewers to see the effects of mass human consumption.

As well as creating the exhibition design concepts, Met Studio has designed frontages for each of the three galleries and software storyboards for the exhibitions, including all mechanical layout and system logic programming.

The consultancy is also creating graphics and communication in the galleries, which will be in Chinese and English, though Hicks thinks a local consultancy will create signage and wayfinding.

It is hoped the centre will open in early 2012.