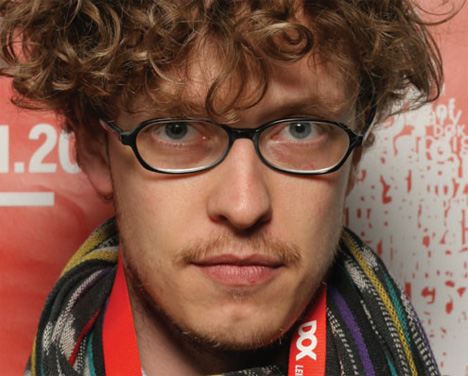 Max Hattler’s films are symmetrical worlds of rotating kaleidoscopic wonder that are truly entrancing. Does he ever feel dizzy when he’s making them? ‘No,’ he laughs. ‘I think that happens to the audience more than to me.’

Three of the German-born, London-based animator’s films are showing at the London Short Film Festival this month – perfect for a jolt of post-Christmas inspiration. Spin, for instance, sees animated toy soldiers marching through intricate formations as if they were in a Busby Berkeley musical. The meaning behind their dance grows clearer as the soldiers enter combat. ‘It’s an abstracted look at the media translation of violence. Obviously, toy soldiers is one example, but it’s this whole idea of people as patterns – from the workforce to the troops,’ says the 34-year-old filmmaker.

Spin is the follow-up to Hattler’s award-winning 2006 film Collision, which commented on the War on Terror by merging and animating elements of the Stars and Stripes, American quilts and Islamic and Arabic patterns. ‘That film has a political message, but at the same time it is visually sexy and appealing – like pop,’ he says. ‘I get quite interested in this idea of drawing the viewer in through aesthetic beauty and patterning, but then there’s a real story underneath which is maybe pretty dark.’

Two more films – 1923 aka Heaven and 1925 aka Hell, also showing at the London Short Film Festival – have more of a spiritual and personal than a political story behind them. They animate paintings by Augustin Lesage, a 19th-century French miner who took up painting on the instruction of a disembodied voice. The symmetry of Lesage’s images, and the story behind them, piqued Hattler’s interest. He decided they needed to move to music. The films might have been called just 1923 and 1925, but Hattler and the Danish film students who assisted him wanted to emphasise Lesage’s spiritual experiences, so they used a little artistic license. ‘I had them online and they went viral, but really they’re made as installations. It’s a double-projection installation so you have both Heaven and Hell inhabiting the same space – the sound overlaps, and you can see both simultaneously,’ he says.

Hattler studied media at Goldsmiths, where he decided that animation was the best place to combine his love of graphics and music. Although based in London, he keeps a busy schedule – showing films, talking and holding workshops at festivals around the world. He also gives live audio-visual performances using what he calls the Hattlerizer, which he describes as a ‘visual instrument’.

Commercially, Hattler has directed TV ads and pop promos for various acts, and is signed with the production house Partizan. He also created the stunning backdrop for Basement Jaxx’s live performances of Where’s Your Head At.

But conceptual work is what he really relishes. Another recent creation is Sync, a 2010 collaboration with a physicist and a chronobiologist that visualises ideas about time and the universe, starting with the Big Bang. ‘Physics was created at that moment [the Big Bang]. Time was created at that moment. To try to visualise that, I created this massive spinning disk, Sync, that we’re zooming out of continually until the end of time.’

If that doesn’t sound dizzying enough, his next project involves further optical madness. ‘I’m writing another film based on moiré patterns, which is going to be even more disturbing to the epileptics among us,’ he says. ‘I don’t put any warnings on my work either – I guess I should start doing that before I end up getting sued.’