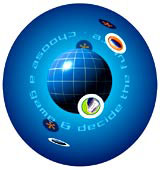 Itch has designed the interactive exhibitions of the In Future gallery, working closely with the look and feel of Casson Mann’s design. Dimly lit, with minimal interiors, the gallery features three luminescent projected circular tables. ‘It has a casino-like atmosphere,’ says Andrew Hirniak, co-founder of digital design consultancy Itch. ‘The third floor is the exit point to the Imax cinema, so at some times of the day it will be incredibly busy. Since this is an exhibition for people to dip in and out of, we didn’t want an “in your face” design, but a rather low key one. Yet, the aim is still to provoke people about the future dilemmas of science.’

The tables seat eight people and have eight corresponding input stations, with a wheel and a button for interaction. Each interactive exhibit is designed as a board game. One explores the possibility of male pregnancy, highlighting some of the risky issues around it. The game follows the man from conception right into delivery ward just like a drama performance. It then questions the user about the acceptance or not of this future technology.

Other subjects include electronically tracking children, selecting the genetic characteristics of babies and the use of electronic surveillance for security purposes. ‘The interactive exhibits have quite a graphic feel: they are very colourful and bright,’ says Hirniak. ‘They contrast with the dark and blue Casson Mann interiors.’

Stills from In Future gallery’s interactive ‘board game’ exhibits, designed by Itch

Identity in mail for Postcomm