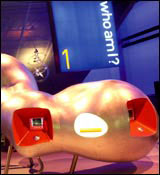 Digital media is big at London’s Science Museum Wellcome Wing. A whole floor called Digitopolis is devoted to the digital technology revolution and that’s just a portion of over 60 interactive displays, ranging from art installations to audio visual projections and interactive exhibits. Collectively, these elements deliver a powerful showcase of digital design.

Conceived as a theatre of contemporary science, the impressive four-floor cantilevered interior houses exhibitions on developments in science, medicine and technology. Tim Molloy, head of design at The Science Museum, explains its intent. “The vision behind the wing was to create a museum about science now and in the future. It’s not about hypothetical science, it’s about the science which is currently being made,” he says.

Designed by architect MacCormac Jamieson Prichard, the £50m new extension is heralded as a pioneering concept, but it also has links with the past. “The idea was to create a memory theatre like in the 16th century,” says architect Richard MacCormac. “The visitor arrives on a stage and all the information is displayed clearly in front of him on different levels.” The main blue glass wall and lateral screens are also digitally influenced. “When we looked at the preliminary drawings on the computer screen the backdrop was blue. That inspired us for the actual building,” says MacCormac.

Exhibition design followed suit. “This is such a dramatic building that we had to drop in galleries that could support the architect’s vision. Sometimes there is a mismatch between the exterior and the exhibitions,” says Molloy.

Although the exhibitions feature discoveries and issues which are current science debates, the Wellcome Wing has the feel of a futuristic voyage into knowledge. Enter the dimly lit galleries and there are enough screens, lights, projections and sounds to overwhelm the senses.

The ground floor contains Antenna, a science news gallery continuously updated. Pattern Pod, also on the ground floor, introduces undereights to the importance of patterns in contemporary science. Animal footprints, dancing and even carpets are some of the patterns explored. Bright limes, blues, oranges and pinks convey the playfulness of the exhibition.

The first floor, “Who am I”, explores biomedical science. Visitors will be able to log on using their fingerprints and create their own Web pages to be consulted again back at home. Illuminated walls of printed chromosomes divide the various sections, while Casson Mann’s curvy “biomedical and life science organic interactive display structures”, the aluminium bloids, contain the interactive exhibits. The gallery is divided into four sections. Human Animal looks at traits such as genes, language and consciousness, which distinguishes humans from animals. Family Tree traces our genetic history via DNA, and Identity Parade focuses on genetic makeup. Live Science offers the public a chance to contribute to the progress of biomedical science by volunteering for a research programme.

Digitopolis, on the second floor, is devoted to the ways in which the digital revolution is affecting human life. Digital sounds, visions, global communications and artificial intelligence are explored, as visitors are given the opportunity to experiment in first person the powers of digital technology. On show is the computer on which the World Wide Web was invented and robots used by scientists to understand the social origins of human intelligence.

In Future on the third floor focuses on the opportunities for science in the future. As Molloy points out, “It’s not an abstract future-gazing exercise, it’s about the near future.” Controversial themes such as male pregnancy, genetic selection of babies and the electronic tracking of children are discussed as digital games. Users of the interactive exhibits can choose a set of possible solutions and later express their opinion on two separate stations.

Art installations, from Marc Quinn’s Frozen flowers to Yinka Shonibare’s Effective, Defective and Creative, show the museum’s vision and its new role as an art commissioner.

The Making the Modern World gallery links the main museum space and the Wellcome Wing. A selection from the museum’s best, it features iconic objects such as the Apollo 10 command module and Crick & Watson’s DNA model. Finally, the 450-seat Imax cinema will show films during the day, including the specially commissioned Solarmax film. With its massive screen and captivating sound and image effects, visitors can conclude in grand style this mesmerising leap into science.