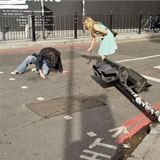 Much recent art photography is far from candid, concentrating on elaborate, staged scenes. Yolanda Zappaterra applauds an exhibition that marks a return to its roots in spontaneity and flux, showing the work of an emerging generation of street photographers in London

Ask people what photography does, and they are likely to say that it ‘captures a moment’. But, in the last decade of professional and art photography, it has become anything but – shoots take hours to set up, concepts are developed and put in place before a photographer even goes near the camera, and even seemingly impromptu moments are carefully set up, with lighting, composition and framing worked out to the last detail. There’s nothing wrong with this approach, but what had seemingly been lost was what photographers and art historians call the ‘decisive moment’ school, or ‘street photography’ – that form which places the photographer in the role of the hunter, searching for a moment that seizes or makes sense of the chaos of everyday life.

However, Onto the Streets, an exhibition opening this month in south London photography gallery and centre Photofusion, aims to show that street photography is back with a vengeance – and it’s not of the romantic streets of Paris or the urban chic of New York, but the grimy, urban chaos that is London.

Curated by photographer and TV producer Stephen McLaren, together with the curator of public programmes at Tate Modern, Sophie Howarth, Onto the Streets gathers some 45 images by contemporary street photographers that are completely unstaged, taking the fine tradition of work by classic practitioners of the genre, such as Robert Doisneau, Henri Cartier-Bresson and William Klein, and infusing it with the savvy ‘London look’ developed in the fashion photography of Wolfgang Tillmans, Jason Evans and Juergen Teller. The results are striking and wholly original, and do something that very little recent contemporary art photography has done. 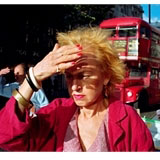 ‘By going out every day, almost obsessively, to hunt the streets and capture things that are in the detail, not the grand themes, the photographers in the exhibition capture the things we’re surrounded by and don’t see. Collectively, I hope they give us a sense of modern life and what it’s doing to us,’ says Howarth. The images undoubtedly do that, showing a London that is made up not of architectural greatest hits, but of incidentals that should provide a fascinating social document in years to come.

Some, like Matt Stuart’s men lying on the grass, document the lack of interaction in urban settings. Others, such as McLaren’s traffic light scene, intrigue through disturbing narrative, and many show the sheer weirdness and unselfconsciousness of urban living/ a businesswoman carries a pile of 4×2 timber batons across a bridge in a picture by Gary Alexander; a man carries a stress ball along Bishopsgate in an image by Nick Turpin. As Nils Jorgensen, one of the photographers in the show, says, ‘I am continuously startled by what everyday life can present, by its chance happenings. Reality is far more strange than anything one could invent. And by photographing it, it’s like looking into another world.’

The images also ask questions about the way we live our lives in a city: Stuart’s girl dropping her chips, for example, speaks volumes about the nature of fast, awkward and lonely city life, while his Peacock documents how ugly mundanity and billboard perfection can create unexpected pleasures. ‘They show London for what it is – not a city that’s pretty or coherent, but a messy place in flux,’ says Howarth.

The decision to show only colour work, rather than include black-and-white work with its attendant sense of nostalgia, also heightens the harshness of city life and ‘creates an immediacy of connection between the photographer and the subject,’ says Howarth. 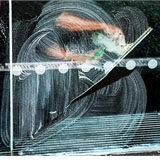 Whether street photography will continue its recent renaissance remains to be seen. Earlier this year, Erno Nussenzweig, an orthodox Jew who’d been photographed in New York’s Times Square by Philip-Lorca diCorsia for his Head series, lost a lawsuit against the photographer, but the fact that the case went to the US Supreme Court has had an undoubted impact on the confidence of photographers to snap unsuspecting people in the street. Still, as Jorgensen says, ‘Street photography is something that requires little planning. It’s about reacting to things and events around you. These events are happening whether or not you are there, and do not involve any interference on your part. You simply have to be there, to see it and photograph it. It’s a democratic genre of photography too – one in which anyone can participate, no matter what their experience or budget.’ Which, hopefully, means that as long as there are streets and cameras, the form will continue to thrive.

Onto the Streets: Contemporary Street Photography in London runs from 21 July to 16 September at Photofusion, 17a Electric Lane, London SW9. For more information see www.photofusion.org