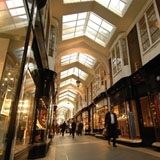 The brand redesign comes ahead of a multimillion-pound refurbishment project, which will see the arcade repositioned as a more luxury shopping and leisure destination.

Blue Marlin has designed an identity that is Victorian in its overall style, but with a modern application, says Tess Holmes, creative director, corporate, at Blue Marlin. The typography, rendered in gold lettering, is decorated with a Tudor rose monogram, which forms a key feature of the identity. The graphic image of the rose is a representation of an architectural feature located in the arcade itself.

Blue Marlin is also creating all the promotional material to support the relaunch of the arcade. The consultancy is putting together a portfolio of photographic images, with a view to creating an updated photograph library of the arcade. The images will be highly stylised, reflecting the quirkiness of the Victorian era, adds Holmes.

Some of the images will feature on a new website, www.burlington-arcade.co.uk, also designed by Blue Marlin. The brand identity will launch on 11 July. Blue Marlin will begin redesigning the website next month. The consultancy was appointed to the project in February, following a closed pitch process.

The arcade is being repositioned to attract a younger target audience. Osel Architecture is undertaking the arcade’s facelift, revamping it with an updated lighting scheme and flooring. Work is expected to start on-site early next year, after the concepts have gone through the planning process, says Victoria Shipton, project architect at Osel Architecture.

‘The plan is sympathetic to the arcade. The new lighting will focus on picking out key features of the arcade, such as its embellishments and roof pictures,’ she explains.

Retail property adviser CWM is handling applications for tenancy at the arcade, which will reopen with its first food outlet and more luxury, giftwear and accessory retailers. The arcade is being asset managed by John Baker group.

‘The arcade was a bit sleepy and had lost its way. We want to create more variety and attract a different crowd. The units are quite small, but rent is high, so we are fairly limited in the type of tenant who will come to the arcade,’ says CWM partner Shirin Elghanayan.