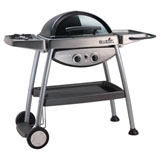 Barbecues are as much about style as about function, but they must still be up to scratch when it comes to cooking. Clare Dowdy checks out the latest incarnations of an old favourite.

Like the paddling pool and the badminton net, barbecues symbolise balmy summer days – they are steeped in a similar combination of nostalgia and expectation. But we have higher expectations of the barbecue than we do of a pool or net. A barbecue, after all, must operate on functional, social and aesthetic levels. As the focus of attention, it must look good and work as a gathering point, and, as the outdoor cooker, it must cook the food properly. But many on the market seem to fail, one way or the other.

Residential designers keep telling us that the garden is an extension of our home. But many barbecues let themselves down in this respect and have none of the design cues that householders have come to expect.

‘At the high end of the market, the design vernacular is centred around the sort of pseudo-industrial, professional kitchen aesthetic,’ says Robert Brunner, partner at Pentagram in San Francisco. These are the sorts of devices that eligible bachelors aspiring to boutique hotel-style living quarters might like – big, boxy and stainless steel.

‘None feels like an outdoor appliance, nor seems to have considered its impact on the social aspects of outdoor cooking,’ Brunner adds. These are two issues that his own Fuego 01, which goes on sale in the US this August, tries to get around. He likes to think of his creation as a campfire for Modernists.

Meanwhile, at the lower end of the market, it’s all about price, says Steve May-Russell, managing director at Smallfry, which designed the Garden Chef, a barbecue for US manufacturer Char-Broil, tailored for the European market. ‘Our experience is that most of the market in Europe is price-led. Lower price points dominate sales volume, which does not lead to many well-designed products.’

But creating a better-looking and better-working contraption is not straightforward. First, there are the safety concerns to take into account. May-Russell found that European consumers are nervous of cooking with gas. ‘It was important for us to understand that you need good combustion conditions for safety compliances, and that fat from food can cause flare-ups,’ he explains. 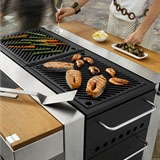 This is where the lid comes in, says Brunner. Lids tend to be big and round, and, coupled with a big, round bottom half, a barbecue can come to resemble those Martian characters from the Smash TV commercials. The lid is supposed to be dual-purpose – to capture the heat and smoke, and to provide protection from spitting fat. ‘The functional premise seems to be that the lid should be large enough to cook a whole turkey,’ he adds. But Pentagram’s research showed that, actually, 95 per cent of what people do is grill, and 99 per cent of what they grill is ‘low-profile’ food, such as steak, burgers, fish and chicken pieces. ‘So, to break the paradigm, we developed a low-profile lid for Fuego (pictured right) that stores in the body of the grill,’ he says. This allows a whole new approach – more like an ‘island’ grill, he adds.

Clearly, some innovation in this sector is getting through. Along with the Garden Chef and Fuego 01, there’s the almost sculptural Phoenix. Manufactured by Wittus in the US, its industrial designer is the Dane Bent Falk.

The design of the cone-like chimney means smoke is funneled away from the cook and his or her inevitable spectators. And the body of Corten steel will naturally oxidise to create a pleasing rust effect, so it will age well, even if it’s left outdoors.

Likewise, the Fuego’s teak countertops can either be oiled to maintain their original colour, or left as they are to acquire a silvery patina.

And for a retro break from the norm, there’s the Memphis, developed by B&Q with independent designer Matthew White and manufacturer Universal Innovations’ in-house team. With its pallid colour palette, soft curves and ribbed steel handles, it has more in common with a 1950s American fridge than with a conventional barbecue.

If gardens really are becoming the ‘room outside’, as May-Russell suggests, barbecue manufacturers should be cashing in on this more than they have done so far. 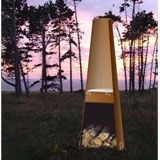 Pentagram, for one, has picked up on this trend, although details of future developments are not yet forthcoming. ‘We are developing new ideas that merge the barbecue with outdoor furniture and push it deeper into the social experience,’ says Brunner, somewhat elusively. ‘Shape, material and function will be driven by a new premise, which, in addition to the cooking function, will define the grill in the new patio landscape.’

One thing that the new generation of barbecues do have in common is their increasingly outlandish names. No longer content with it-does-exactly-what-it-says-on-the-tin monikers, it seems as if the barbecue people are taking a leaf out of the static caravan naming guidelines. We’ve got the Phoenix and the Fuego 01 – what will the marketers come up with next? The Elite, the Vantage and the Mystique?

EC defends its decision to use students