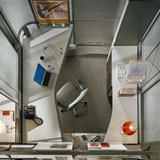 The US has traditionally pioneered new ways of thinking about office space and working. Barry Jenkins reports back from this year’s Neocon fair in Chicago on the latest developments, including an increasing European influence and new ways of creating privacy

Neocon, the annual corporate interiors and workplace furniture fair held in Chicago, has been changing to incorporate a growing array of separate shows, taking in subjects from hospitality to sustainability.

Despite the developments, the core of Neocon is relatively unchanged. So, although you may expect to see new ideas and emerging trends, Neocon, in the main, confirms the conservative nature of the US office furniture market and the obsession with creating enclosed workspaces. From a European perspective, this is paradoxical, given the way theories and technologies often start in the US and lead to new ways of working. To that end, Herman Miller, Steelcase, Knoll and Haworth have long been torch-bearers for innovation.

Less conventional is My Studio. Here the workplace landscape is inverted so that the worker no longer works into a dead corner. While essentially a system of enclosure, Ball was keen to provide as much transparency as possible, leaving gaps in 90 degree internal corners and making external corners curved and transparent. Herman Miller has developed a good narrative to support the concept, based around a footprint of 1.8m by 2.5m, along with a lexicon of trademarked descriptions including Permeable Privacy, Zone Logic, About Face and Vanishing point. My Studio is idiosyncratic, aesthetically, but having developed Resolve and Aeron, two highly individual products, Herman Miller is used to challenging conservatism.

The second desk range of note comes from Knoll. Designed by Piero Lissoni and Marc Krusin, Wa recognises that smaller computer technology allows for compact, rectangular workstations. Linking with storage units, the overall styling is minimal and European, creating simple, rectangular layouts not unlike those popular among users of USM Haller. Wa, with its European influence and striking colours, was a welcome respite in an otherwise familiar array of panel systems.

However, the European pedigree was most evident in Patterns from Haworth. Using a simple slab to build ‘bridge structures’, Patterns continues on from Compose and Enclose shown last year. The programme is now complete, with a common form being applied at different scales to create interior architecture and walls, as well as furniture, including desks, benches, display units and even beds. The approach is minimal and deliberately ambiguous, making Patterns suitable not only for corporate interiors, but also for retail, hotel and even domestic use. Stylistically, Patterns is reminiscent of Bulo or Unifor – no surprise, as the programme was designed by Studio & Partners in Milan and directed by Haworth’s Italian-born president Franco Bianchi. 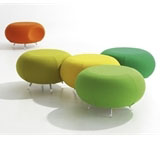 There was a clutch of new seating products from Interstuhl, Geiger, Vecta and Allemuir. The most notable, if only for its clumsy appearance and limp ride, is a task chair from Keilhauer, called Sguig. Designed in Austria by Eoos, it features a large coil spring at the base of the column to provide complete rotational and tilting movement, which was somewhat uncontrolled by the nature of the spring.

Attendance by materials companies continues to grow because of the interest in sustainability. Interesting companies included Chilewich, which produces a vinyl floor covering called Plynyl, and Nood, a start-up weaver with a very committed ecological agenda.

Neocon is well executed, but consistently reflects corporate America, despite the growing European influence and the market UK companies such as CBS, Allemuir and Sandler have found in the US. However, apart from the richness of the showrooms, there is always the added bonus of the many delights of Chicago.

Barry Jenkins is a director of Broome Jenkins