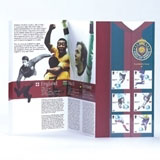 Royal Mail is this week holding final creative presentations for the formation of its next marketing communications design roster, and expects to have a list of up to five consultancies in place by mid-August.

It is the first time the roster has been reviewed since 2003, when Start Creative, The Open Agency, Home, The Design Group and Carter Wong Tomlin were appointed for a three-year period. The contracts, which will run for up to four years, cover all of Royal Mail’s design services for marketing communications, but exclude stamp design and related projects.

Separately, Manchester consultancy True North has designed the First Day Cover for a set of stamps commemorating 40 years of the FIFA World Cup (pictured). Designed by independent designer Madeleine Bennet, the stamps feature the six nations that have won the tournament since England’s success in 1966.

Royal Mail has also appointed True North to design a new stamp issue that will be published next year, although a Royal Mail spokeswoman declines to reveal details of the commission.

Royal Mail’s head of design for stamps, Jane Ryan, took redundancy earlier this year and has not been replaced. Design managers Susan Gilson and Catharine Brandy are understood to have taken over responsibility for stamp design commissions (DW 9 March).