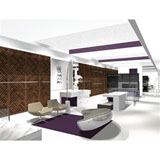 As competition from modern retailers increases, London’s Savile Row is reinventing itself to appeal to a new clientele, says Sarah Balmond

George Brummel, the 19th century dandy credited with helping to establish London’s Savile Row through his patronage, would be turning in his grave if he could see the street now, such are the changes that are happening there.

The US-based fashion brand Abercrombie & Fitch is poised to open its first UK flagship store there; last year Japanese retailer Evisu, more famous for its denim than bespoke tailoring, launched its stand-alone store slap bang in the middle of the street; and now there are plans to develop an office block based at the building that was formerly occupied by English Heritage.

Spiralling rents, coupled with increasing competition from neighbouring New Bond Street and Conduit Street, are pushing some of the more traditional retailers out of the area, or forcing them to come up with innovative ways of transforming their unassuming outlets with more glamorous environments that appeal to a different kind of consumer, more concerned with luxury than bespoke tailoring.

Norton & Sons, one of the oldest of Savile Row tailors, established 185 years ago, is working with Moving Brands to redesign its brand identity, in an attempt to attract a younger clientele (DW 22 June). Managing director Patrick Grant bought the company last December and has already redesigned the shop interiors with a more ‘simple and elegant’ scheme. The revised brand identity will reflect the company’s heritage, but will also be in keeping with its more modern look.

‘We are an old firm, but don’t want to be seen as fuddy duddy. There is an expectation when buying luxury goods and we want to create that experience, but it is also important to not be seen as a mass luxury firm like so many of the other retailers. Savile Row is changing, but, to its detriment, there are fewer and fewer bespoke tailors,’ says Grant.

‘In general, I think the retailers on Savile Row must think about what their heritage means to people now. Who should their brand spokesperson and icons be?’ ponders Ilona Ludewig, business development manager at Moving Brands.

However, it is precisely Savile Row’s heritage, with its associations of quality and luxury, which other retailers are seeking to emulate and tap into. Kent & Curwen, the gentlemen’s sportswear and accessories retailer, is making its UK comeback this September with a 130m2 flagship, located in nearby Conduit Street. Softroom has designed the interiors, taking inspiration from Savile Row, but inverting the traditional design cues found in stores on the street to create an eclectic and quirky interior (DW 1 June).

For example, an organic looking chaise lounge, designed by Future Systems, will be installed at the shop’s entrance. ‘Often, in Savile Row, the first thing you see is not merchandise, but a nice big sofa. The chaise gives the same message of comfort, but provides a new spin,’ says Oliver Salway, director of Softroom. Similarly, the wooden floors typically found in Savile Row stores are also given a new twist with a raft of parquet that has been applied to the interior walls.

‘You can’t just copy Savile Row or it becomes a pastiche. The challenge is to draw strength from Savile Row’s heritage and authenticity, without pilfering from it entirely. In general, Savile Row is changing in relation to an evolving consumer demand,’ adds Salway.

Shirin Elghanayan is a partner at retail property advisor CWM. She is currently consulting with the owners of Burlington Arcade to help reconfigure the 3437m2 area with a more youthful proposition. The arcade will feature more giftwear and accessory retailers, as well as its first café outlet. The architect on the project is Osel Architecture, while Blue Marlin is creating the revised brand identity and CWM is responsible for aligning the new tenant mix. 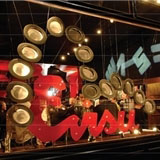 Elghanayan believes the redevelopment will have a positive knock-on effect for neighbouring Savile Row. While she understands why many of the more traditional retailers are ‘in uproar’ over the recent changes to Savile Row, she views the evolution pragmatically.

‘Retailers are becoming a bit fed up with Bond Street. Savile Row still has a name and it is viewed as quirky. The changes will attract a new crowd, but this is life. The times have moved on. I don’t think the traditional Savile Row tailors will ever go, but they will have to learn to live alongside the new retailers,’ she says.

Though Savile Row’s days as the epicentre of British tailoring may be numbered, its legacy is certain to live on, as retailers seek to not only replicate, but also piggy-back its reputation as they close in.