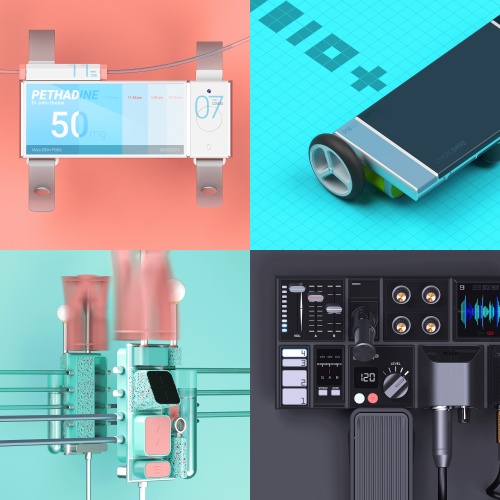 Seymourpowell has developed a series of concepts, which demonstrate how open source hardware might be used to create products addressing the needs of individuals.

Using Google’s Project Ara open hardware platform, Seymourpowell has created four “modular tech” concepts. The aim is to demonstrate how a number of products could be brought to market both cheaper and quicker, and be more tailored for the individual user.

The four concepts, called Move, Wear, Link and Play, have been designed to show the advantages that an open hardware platform could have for individuals and businesses in a wide range of industries, from music to agriculture.

“This would allow developers to create exciting new products relatively easily by reducing the amount of development time, risk and cost to get products to market at a pace not possible up until now.”

Cockerill predicts that the concepts could radically change how new products are conceived and developed.

The Play module offers musicians “infinite flexibility”, by allowing them to bring both digital and analogue modules together to create unique sound performances. Play could be used by everyone from a one-man band to a band’s sound engineers, and Seymourpowell envisions music equipment companies like Boss and Marshall adding to a large audio module marketplace based on classic analogue equipment.

Wear continues the wearable tech revolution through a device that addresses a patient’s medical needs. The wearable device would have an instant connection to medical staff, as well as biometric monitoring, and would adapt to different stages of the patient’s treatment journey to the hospital.

Move is a robot printer that scans and prints the surfaces it travels. It could be modified to be used by fabric and pattern cutters, or for interior design, construction and surveying. The printer could be created from existing batteries, Bluetooth modules and processors. Two unique modules would be created, a printed head and a motor/wheel module, which could then also be used by other developers to create new products.

Link is envisioned as a series of “potentially infinite modules” that monitor and provide feedback on their environment. Seymourpowell’s example sees it configured for agriculture with rain collecting, soil, moisture and light sensor modules. They would be supported by a a wi-fi module to collect and send live data, enabling farmers to make decisions based on the current conditions and optimize their crop productivity. The device would be powered by a small wind turbine and solar cell.