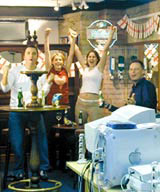 The things consultancies will do to get a bit of culture going in the office. Oh, and the things they’ll do to stop people falling mysteriously ill during England World Cup games.

Asylum has bought the interior of the soon-to-be refurbished Crown Tavern pub on London’s Clerkenwell Green and has re-constructed it in its offices – panelling, furniture, the lot. Mental.

‘I could even feel a bout of the dreaded “worldcupitus” coming on myself, but now I feel much better,’ says Asylum managing director Andy Sallis.

So, the boss was considering a sickie? Silly thing to admit, really. It looks like Sallis could have scored an own goal before the tournament has even started.

Fear of a future in which spirituality is sponsored