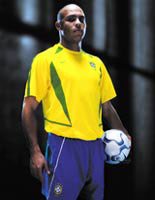 The World Cup is full of products that have spent years in design and development: from boots to allow Thierry Henry to make quick incisive turns and help Patrick Viera to cover more ground; to balls that make it simpler for Michael Owen to score more goals; and shirts to prevent the Russian team from over-heating in the Land of the Rising Sun.

With all the marketing hype, however, is the ultimate aim to improve players’ performances and make games a better spectacle, or just a manufacturer’s ploy to boost post-tournament sales? In design terms, is it a question of form over function?

Possibly the most high profile product on display at the World Cup is the official matchball, designed by Adidas. Called the Adidas Fevernova, it features a ‘dynamic and revolutionary design’ and is also the first official Adidas ball to break with the traditional ‘tango’ design.

Former Adidas designer Mathilde Evrard, who created the look for the ball, says the design had to have universal visual appeal and retain its design qualities during flight.

‘When you play with the ball the logo is balanced, so it is not disturbing to the eye. Adidas took a bold step by leaving behind its old design, but the logo has changed because it is the first World Cup in Asia and the first one of the new millennium, so it’s a very important occasion,’ she says.

‘The logo is about speed and power and has an industrial look to represent the industrial powers of Japan and Korea. The flames on the ball represent a passion for football and there is also a gold shimmer, which makes the ball look unique,’ Evrard adds.

Adidas has also refined the ball’s performance with further work on the syntactic foam layer, first introduced at the 1998 World Cup. The manufacturer claims the ball now features ‘remarkable energy return properties and additional cushioning’ for enhanced control and accuracy.

Unfortunately for Adidas, some players don’t seem to agree. Turkey’s Abdullah Ercan is quoted as saying, ‘It bounces so wildly, you just cannot kick it where you want to’, while Italy’s Gianluigi Buffon likens the Fevernova to ‘a ridiculous kiddies’ bouncing ball’.

Despite this, Adidas has already started gearing up for the development of a new ball for the 2006 World Cup in Germany.

Nike, like Adidas, will have top players wearing its boots and top teams wearing its shirts. All Nike products are designed in-house at its Oregon headquarters in the US.

Nike has designed different boots for forwards and midfielders. Among strikers wearing the Nike Mercurial Vapor boot, which Nike claims is the lightest football boot ever made, will be Ronaldo, Henry and Robbie Fowler. Midfielders including Paul Scholes, Roberto Carlos and Viera will meanwhile sport the Nike Air Zoom Total 90 II.

‘These boots are performance pieces rather than just functional. The boots improve the physical performance of the players,’ says a Nike UK spokesman.

The Vapor boot weighs in at just 194 grammes per boot, two grammes lighter than the track spikes worn by sprinter Maurice Greene when he won the 100m gold at the Sydney Olympics.

‘The design principal is minimalism. The boot has been stripped of any unnecessary materials in order that the striker can move as quickly as possible,’ says the spokesman.

For the Air Zoom boot Nike has developed a side-lacing system, which it claims provides a cleaner striking surface for the ball, while an ultra thin ‘first touch’ coating is positioned across the boot, supposedly improving touch and ball control. Nike also claims the boot protects against stud pressure and improves traction and stability.

‘These are designed for midfielders, people who run a lot and work hard for 90 minutes. Someone like Viera runs about 11 km in a match,’ the spokesman says.

So, do football boots get any better than this?

‘Well, can a boot get any lighter than the Vapor? Yes, it can. However, you can get to a point where the design of the boot overrides its performance on the pitch. The theory behind a design can be stopped by the rigours of the game. A boot can be made too light, so it stops working,’ says the spokesman.

The boots may turn the ordinary player into a world class striker, but surely the most important thing is how they look on the feet?

‘In terms of the look of boots, it really depends. The players have got to be happy with what they are wearing. Some of the young players want to look really flash, while others, like Paul Scholes, want something quite traditional, says the spokesman.

‘You also have to take into account when the boots go to retail. For the consumer you want striking designs,’ the spokesman adds.

David Beckham, who will wear Adidas’ Champagne Predator Mania boots for the tournament, knows the look is all-important. ‘It is important to me that I feel right and look right when I’m playing – especially in the big games,’ he says.

Nike says it has addressed three key issues through its designs – weight, comfort and heat/ humidity – by creating a shirt with two specific layers to generate ‘thermo regulation’ via the movement of the player.

The result is that the shirt retains less moisture and body heat regardless of the weather conditions. The shirt is also 22 per cent lighter than Nike’s previous national team shirts.

But, will any of this stuff make a jot of difference to England’s World Cup performance? One thing is certain, whatever the result on the pitch, competition for sales off it will be intense.

Artists of Radio Times: A Golden Age of British Illustration