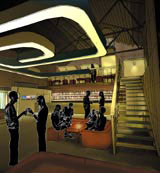 Although Skakel & Skakel has created graphics for previous Match bars – Match operates four in London: two Match bars, Sosho and The Player – Leicester is the consultancy’s first full-scale Match Bar, and the first outside London.

The design principles of the bar remain, such as exposed brickwork and dark wood furniture, but the interiors have moved on, says Skakel & Skakel director Bob Thwaites.

The Leicester bar, scheduled to open in October, will be more of a bar/ club concept, he says. Customers in Leicester are slightly younger and more inclined to go out drinking later rather than straight after work. They are also more likely to stand and, particularly at weekends, dance, he adds.

Thus a dancefloor area is located on the second floor, which leaves room for table service areas on a mezzanine first floor and a main bar area on the ground floor.

‘We wanted to be able to change the mood and atmosphere through lighting and, of course, turning up the sound system. A weekday lunchtime crowd expects something different from a Saturday nightclub audience,’ he says. Lights are a mix of pendants and chandeliers and theatre-style light boxes.

The Leicester location was dictated by the ‘fantastic’, large site available, rather than the city itself, Thwaites says. He is introducing quirky wallpaper to the interior and addressing the lighting with the help of specialist Into. Contagious has designed all graphic elements from menus to signage.