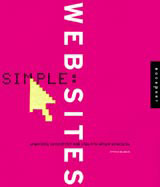 A colleague and I once had the idea of producing a book about the design and build of really terrible websites, the more well-known the better.

We would categorise the sites under themes such as bad interface, crap technology, hopeless navigation and so on, and each one would be accompanied by first-person interviews with those responsible for the sites: designers, developers and producers through to project managers and even the marketing department. It seemed like a great idea and we even had a title, which I’m still very pleased with. It was going to be called Designing the world’s worst websites: We do it so you don’t have to.

That there is still a glut of Web-related design books coming on to the market bears testimony to the fact we weren’t the only under-employed individuals out there with literary aspirations. The latest one to arrive on the market is Rockport’s Simple Websites by Stefan Mumaw.

The 159-page book is based around 24 case studies grouped into three themes: content organisation, encouraging ‘visual minimalism’ and simplifying the user experience. Each case study is designed to illustrate a specific point, such as content or digital storytelling, though, erroneously in my view, there are none that specifically deal with ‘The Client from Hell’.

I’ve had the unusual luxury of living with this book for a few weeks now (rather than the few days I normally have to review a book) and have to admit I don’t like it. At first I thought it was a gut prejudice against yet another fast-buck website design book, but closer examination of the book brought its failings out all too clearly.

Those case studies, for example. Because none of them are familiar brands surely a certain amount of background might have been useful for contextualisation? But under the heading How to inform intelligently, we are told that BriteSmile, a ‘leading provider of teeth-whitening services’, wanted to redesign existing content from a previous site to better communicate and brand the service.

What we then don’t get is any sense of what those brand values are and how the old site failed to communicate them. Instead, we are given a series of nice screenshots, a so-small-as-to-be-useless sketch and a sitemap, all accompanied by some unintentionally humorous, but largely pointless captions: ‘The visual site map is driven by function. It shows how the user will move from section to section in a generic, visual way.’ As MTV star Ozzy Osbourne might say if he designed websites: ‘For fuck’s sake, Sharon. What else would a site map be driven by but function?’

Simple Websites feels like the new media equivalent of a cookbook for non-cooks: mouthwatering pictures and grand-sounding ideas. But no practical advice, instruction or sharing of genuinely useful ideas on the off-chance you ever decide to whip up the on-line equivalent of a crÃ¨me brÃ»lÃ©e.

Unusually, but presumably deliberately, there is no reference to software or backend technology. While this means the book won’t date as quickly, it fails to acknowledge technology does make a difference or recognise a website is more than something to be looked at. For the price, I’d like Nigella Lawson’s recipes and not just the pictures.

Simple Websites is published by Rockport on 30 May, priced £27.50

Panasonic strategy work could lead to a rebrand

Kitting out the competition

On the flight path