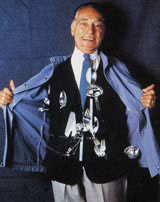 To understand how radical Achille Castiglioni’s work was when he began creating it in the late 1940s, you have to imagine the conservatism of the emerging design scene in his native Italy at the time. Daringly using naked metal tubing and aluminium – materials hitherto considered industrial and so inelegant in a domestic context – he provided an alternative, appealingly casual aesthetic to the stolid, repro designs then dominating the market. An archetypal Castiglioni piece is the 1962 Toio floor lamp – a paean to the mass-produced, with its car headlight bulbs and exposed transformer.

Lighting was Castiglioni’s forte. An early example is his Turbino light (1951), produced with older brother Pier Giacomo, the two frequently collaborated until the latter’s death in 1968. The starting point for this slimline design was its fluorescent bulb (a new US import); the slender, tubular frame simply continues the line of the bulb. Casting a brilliant light from a small source, its fluorescent bulb was cheaper than incandescent ones making the lamp’s affordability, in the cash-straitened postwar years, admirably democratic. It bore out Castiglioni’s altruistic view that ‘design is not a discipline but an attitude growing out of one’s humanistic, technological, economic and political beliefs.’

Remembered by many as a youthful, chain-smoking livewire, he died aged 82 late last year. His work included lighting for Flos, furniture for Zanotta, electrical equipment for Brionvega, glassware for Danese and tableware for Alessi. Now, in collaboration with Daniel Charny, a design products tutor at the Royal College of Art, furniture retailer Zeev Aram is showing 36 pieces – some from his own collection, others stocked at his London shop, Aram – at the store’s Experimental or New Work Gallery. ‘Castiglioni created a new aesthetic language of postwar Italian modernism,’ says Aram. ‘This is not a retrospective but a personal tribute. He was a good friend, whom I admired for years.’

Born in 1918, Castiglioni graduated from the Milan Politecnico in 1944. In 1947, he set up partnership with Pier Giacomo and his other brother, Livio. (The collaboration with the latter ceased in 1952.) A seminal influence on Achille was Marcel Duchamp’s ready-mades, hence his love of undisguised industrial components, often given a witty twist. On show at Aram are Achille and Pier Giacomo’s avant-garde 1957 Stella seat (a bicycle saddle on a pink leg) and Mezzadro stool (a scarlet tractor seat on a cantilevered support). With its strawberry milkshake-pink support, Stella anticipates the pastels-obsessed 1980s group Memphis, and Mezzadro, the chunky, bold forms of 1960s pop furniture. Both pieces foreshadowed the late 1970s hi-tech craze for furniture made from industrial components painted in Meccano-bright primaries.

Also at Aram is the iconic Achille/Pier Giacomo Arco lamp, designed to illuminate dining tables, a mandatory fixture in today’s grooviest urban pads. Moveable, it was conceived as an alternative to static pendant lights.

Castiglioni’s fascination with industrial components was puritanical and rigorous, but his work also brims with cheeky colour and childlike humour. Its roots lay in a disdain for backward-looking bourgeois furniture, then presciently anticipated – and later affirmed – by the playful spirit of the 1960s and 1970s pop decades.