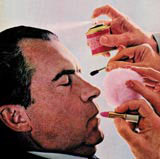 Madison Avenue image-maker George Lois is to release a book, $ellebrity: My Angling and Tangling with Famous People, published by Phaidon in April. Lois, who practically invented the modern art of celebrity endorsement, set up his own ad agency, Papert Koenig Lois, in 1960. Two years later, he began designing a series of magazine covers for Esquire including Andy Warhol juxtaposed with Sonny Liston, Richard Nixon wearing make-up (pictured), Muhammad Ali as St Sebastian and Frank Sinatra promoting a bookmaker. $ellebrity is effectively his memoirs. The book is priced at £24.95. Lois will also give a lecture at British Design & Art Direction on 5 May.