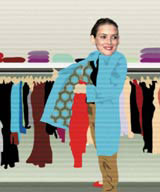 Newly formed Glasgow consultancy Graphical House has created titles for Channel 4 documentary The Real Winona Ryder, due for broadcast at the end of March. The illustrated sequence, for client Nobles Gate Productions, summarises the story of the programme in a light-hearted fashion. It contains cut-out faces of some of the stars that feature in the programme, including Kiefer Sutherland and Robert Downey jnr, superimposed on cartoon-style bodies, according to Graphical House partner Graeme Johnston, who heads up the group with Daniel Ibbotson and Colin Raeburn.