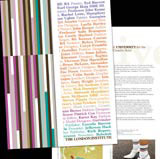 As The London Institute waits in anticipation for university status, rector Sir Michael Bichard talks to Richard Clayton about breaking down art and design boundaries

Maybe it’s the brief delay in the corridor before Sir Michael Bichard is ready to see me, but there’s certainly a headmasterish air about the London Institute rector’s office.

Student art adorns the walls. This being the organisation that brings together five ‘world class’ art and design colleges – Camberwell, Central St Martins, Chelsea, London College of Fashion and London College of Printing – the work is rather better than that which the average sixth form might display. Bichard advances from behind a large desk. Swinging into a leather chair, the erstwhile education mandarin seems comfortable with his surroundings.

This week, the London Institute files its application – designed by Trickett & Webb – for university status. Over the remainder of the year, the Quality Assurance Agency will scrutinise this bid to become the UK’s first university of the creative arts. If successful, it should clear up the problem of the institute’s relative obscurity. As Bichard candidly acknowledges, ‘what the hell’s that?’ is most people’s reaction.

However, he dismisses those who say the institute is merely ‘fancy wrapping paper’ for the prized brands it supports. ‘”What’s the institute done for the colleges?” is often asked. My answer is, had it not been for the institute’s involvement in 1985 those colleges would have been picked off by larger, multi-faculty institutions. You would not have ended up with this vibrant art and design community in London.’

Quite a claim, but it’s spoken with the kind of carefully weighted authority that only a former senior civil servant can manage. Similarly, though Bichard is banking on the QAA making a positive recommendation, he chooses his words prudently.

‘We are confident, not complacent’, he says, affecting a soundbite. ‘I don’t want to give the impression we take it for granted.’

University status is crucial, he believes, as the institute increasingly competes on an international stage. Imagination’s identity brief last year was to foster a closer connection between the colleges’ and the institute’s brands (DW 28 November 2002). But a name change is in the offing.

‘One of the things [becoming a university] will achieve is to sweep away this rather pointless discussion about branding because people will know this is a creative arts-based organisation. We’re not yet sure what we’ll call ourselves, but our intention is to have arts in the title. We won’t downgrade the profile of the colleges in any way – it will just be clearer they are part of a university of the arts.’

Achieving the right balance between the institute and the colleges (‘what do you do centrally and what do you devolve?’) must have echoes of his time in Government. It makes sense to deal centrally with administration, but Bichard also wants to encourage cross-college ‘travel’ among students and academics. There’s a long way to go, he says, but LCP and CSM are working on a design management programme and the institute is inaugurating a college-wide chair for drawing.

This approach tallies with how Bichard sees the world students face on graduating. ‘The boundaries between disciplines in arts, design, film and media are disappearing,’ he maintains.

‘The institute’s great strength ought to be that we’re at the cutting edge of breaking down those boundaries across colleges and within colleges.’

After six years grappling with the straitjacket of ministerial spin, Bichard appears to relish straight talking – QAA sensitivities apart. Perhaps his time in Yorkshire as head of the Benefits Agency has rubbed off; he could pass for an adopted Tyke, albeit with a penchant for ‘blue skies’ thinking.

‘My criticism of the education system from almost the first day I became permanent secretary is that this is a world where people want to speak in extremes: You either produce kids who are able to read, write and count or you produce creative kids. I think that’s rubbish. It’s not one or the other.’

Businesses need people to do both – another balance to be struck. ‘I’m just worried whether we’ve got that right at the moment,’ he continues. ‘At a time when we need creativity most, we have a society that is more averse to creativity than it’s ever been. Wherever you look the pressures are counter-creative. There are dangers that we’re becoming more nationalistic rather than international [in outlook] and creativity’s about cultural diversity.’

Bichard describes himself as tolerant (‘in the best sense of the word’), but this ‘fascinated observer’ shows no qualms arguing a point.

Cool Britannia has made Number 10 ‘very edgy’ towards creative arts, he contends, while the Department of Trade and Industry still doesn’t ‘fully understand’ design and creative businesses. Government support is often generic and lacks credibility, he believes. ‘Instead of funding things like Business Links, they should be directing money to tailored, specific intermediates.’ A member of London Mayor Ken Livingstone’s creative industries commission, he cites Fashionworks, SohoNet and Hidden Art as examples.

His biggest beef is access to higher education and he is critical of top-up fees in principle. ‘It’s absolutely scandalous that no more young people from the lower social groups are coming into university now than we had post-war.

‘A lot of that is about performance in schools, but I’m not sure higher education groups can hold their head up and say we’ve played our part in raising standards. We’ve got a responsibility to do it.’