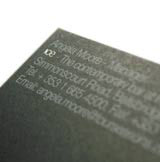 ‘If you’re working with a spa hotel you should talk about health and emphasise its ethereal qualities. But if the hotel doesn’t offer lots of services, you have to find a slightly different hook,’ he says.

But for any branding exercise to work, Stoddart stresses that it must reach to the heart of the organisation. ‘It can’t just be a thin veneer; it has to run through everything,’ he says.

Hughes agrees. ‘The whole experience must live up to the branding,’ he says. He points to the Grosvenor House hotel in London as a successful example. ‘Everyone, from the hotel management to the chamber maids, understands what the brand is about.’

Opius managing director Joss Newberry, who has collaborated with Virgin and Qantas, suggests that hotels, like airlines, ought to view themselves as a ‘journey, from end to end. There has to be a cohesive brand message coming through everything that a guest comes into contact with,’ he says.

Indeed, there appears to be a great deal that the hotel industry could learn from airlines, many of which are viewed as the branding success stories of the past decade.

‘I don’t think hotels do a good job of attracting people,’ says Driver. ‘Their marketing and advertising are not very good; they seem to be afraid of making a statement.’

He suggests hotels look at ‘innovative ways of booking’ or rewards schemes.

Stoddart says hotels should pay more attention to their communication materials. ‘They could concentrate on one point of contact, rather than loads of leaflets littered around the room. Because, eventually, guests switch off,’ he says.

‘After-sales initiatives are good,’ says Clark. ‘Malmaison does that. You always get a nice letter from the manager. It makes you feel recognised.’

In the end, the most successful hotel brands are those that are ‘alive to guests’ individual needs’, says Clark. He recounts a tale about an acquaintance who stayed at an American hotel a few years ago.

‘He went running every day of his stay. On the second day, someone met him with a fresh towel and various anti-smelly things. The fact that someone noticed, and he didn’t have to ask for them, [was impressive],’ says Clark.

However, he cautions hotels not to fall into the ‘obsequious over-servicing’ of which some American hotels are guilty. ‘You know it’s driven by the tipping culture, and it’s just so annoying,’ he says.

Alien abduction is only antidote for Grolsch drinkers

Kent and Surrey institutes to merge

Growth for Havas and WPP Group