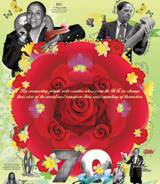 Tomorrow London has designed a series of posters to commemorate the British Council’s 70th anniversary. The posters, which will be displayed across the organisation’s 120 offices, are loosely based on gifts given at celebratory events and aim to encapsulate the diversity of the British Isles, says group director Stephen Flanagan.