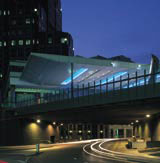 Approaching the Museum of London was once a confusing business – perched on the fringes of the Barbican, overlooking a busy roundabout, this area appears to place higher value on the needs of the motorist than the pedestrian. The message was simple: this was a place you had to really want to visit – you’d never stumble upon it by chance. Now a £33m regeneration scheme has finally improved accessibility and given the museum more presence. With architect Wilkinson Eyre appointed to masterplan the project, gallery space has increased by 70 per cent. A new shaft has been driven down through the building, creating twice as many lifts, more toilets and a new flight of stairs. The high brick parapet wall that masked the entrance has been replaced with a glass front and projecting canopy, making the museum visible from below. Although the Corporation of London wouldn’t sanction a street entrance, by way of compromise, a new ground-level entrance via 1 London Wall is linked by two bridges that span over to meet the museum.

The original revolving door and small entrance have been replaced with a huge foyer capable of accommodating large school groups. Glazed strips in the roof allow daylight to flood in, and a natural palette of stone and timber has been used to create a space that is clean, modern and welcoming. To one side is the museum shop – now twice its original size – perfectly placed to catch visitors on their way in or out. Finishes are hard-wearing without feeling institutional, and grooved oak panels cover one wall to improve the acoustics of the interior when it is teeming with children. A row of benches would have been a useful addition to the foyer, but the museum was concerned about compromising the flexibility of the space with fixed furniture. Aside from the information and security desks, there is a counter along the far wall, which has been designed to pivot so that it can function as a bar for corporate entertaining.

Once inside, nine galleries trace the history of London back half a million years, although the museum’s collection grinds to a sudden halt at World War l. In 2002, Conran & Partners began work on the first gallery London Before London, which looks back to 400 000 BC, but the other eight galleries and education areas are due to be refurbished in the next phase of works. New galleries for the 20th and 21st centuries should be finally complete by 2006. Finding space to site these further galleries required an ingenious solution. By exploiting the building’s unusual ‘Swiss-cheese’ shape by filling the voids that overlook the basement car park and access roads, the architect has found a way to create more space inside.