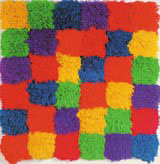 Textile designer Anne Sutton’s work is showcased during Weaving, Wit and Logic. The exhibition, which is on until 18 January 2004, explores the development of her 50-year career and includes over 100 pieces.

Educational Books, until 29 November, is an exhibition of photographs and illustrations that features the work of Alice Hawkins, Richard Kern and Charles Raymond. It brings together three generations of artistic approaches to intimate image-making.

The Milanese artist Marco Petrus’ new paintings and drawings are being shown during his solo exhibition London Suspended from 7 November until 23 December.

Three teams of designers and manufacturers display a new range of classroom furniture as part of Furniture for the Future from 8 November until 7 December.