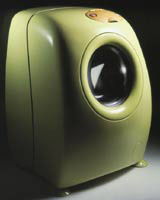 Industrial designer Roberto Pezzetta is one of Italy’s design heavyweights, best renown for his work with Zanussi where he brought charm, colour and humour to the previously bland white goods sector.

In person he is the living embodiment of his design ethos of simplicity, elegance and irony – elegantly dressed, succinct yet emotive in his answers and ready to laugh at the vagaries of life.

Last year, after more than 20 years in charge of the design team at Zanussi and Electrolux, he decided to step away from day-to-day management to take on a roaming role as creative director of design.

This gives him the freedom to add his experience into the mix across a range of the company’s projects and also to realise some of his own ambitions. He has recently released a book to coincide with an exhibition of his work, The Factory and the Dreams held in Oderzo, outside Venice, last month.

It’s his view that excellence in product design comes when designers no longer simply concentrate on the functional and technological requirements, but focus instead on consumers and their needs.

‘Engineers can design good products [from a functional perspective],’ he says.

‘What designers must do is focus on the interface between man and machine.

‘We should understand what users need and not focus on the technology.’

Simplification, reflecting a general trend towards a more straightforward life, is an integral part of Pezzetta’s ethos. His work for Zanussi, with appliances like the Izzi dishwasher, features simple, stylish interfaces, where technological capabilities are assumed rather than overt.

Pezzetta also believes that designers must add a touch of the personal – an emotional dimension – to their work. In his field this translates to mean that domestic appliances should not only be useful, they should be ‘seductive and create an emotional response’.

‘The best products are those that are built from the heart and with gut instinct,’ he says. ‘[Designers should aim] not just to create a product, but also to create poetry.’

It’s not surprising then that he views the advent of robotic appliances with scepticism. Electrolux has a robotics product in its Trilobite vacuum cleaner, but Pezzetta is keen to ‘avoid robotics in the kitchen’.

‘Personally, it’s not for me, I don’t want the machine to talk to me. And it would be a mistake to robotise the creative aspects of the kitchen.’

Pezzetta breaks kitchen appliances into two categories – slaves and the creative components. The washing machine, fridge and dishwasher are slaves, the cooking appliances assist in what he terms the creative process. Aesthetics are important in both.

‘They might be slaves, but they still live with you so they should look good,’ he says. ‘For the creative bit, take the chores away [through self-cleaning ovens for example], but, please, leave cooking open to human intervention,’ he appeals, displaying a distinctly Italian approach to food.

He’s reluctant to predict future trends. ‘The future is tomorrow morning,’ he says. ‘I prefer to move step by step, day by day.’

When pressed, he contends that colour and a more fluid approach are key. ‘I’m not against minimalism, I don’t like to define styles, you can coexist with all of them, but people are fed up with rigidity of form and function,’ he says.

He is hopeful that we are entering a new age, an era where design plays a pervasive role and develops a mass momentum.

‘Across the world there are many, many good designers. At the moment we are still not conscious of the degree to which design is infiltrating our lives, but in the end we will find that we are surrounded by objects that are well designed and filled with poetry. Objects that are more than just products.’

It’s an apt description of how Pezzetta himself treats design and illustrates how much of his own heart and soul are on display in the work he has created.