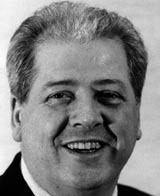 Rodney Fitch is to return to the helm of Fitch, the group he created in 1973, after almost a decade away, it has emerged this week.

Fitch is expected to join as chairman of Fitch Worldwide before the end of the year. Although legal issues are still being agreed with owner WPP Group, it is understood he will be based in London.

Portland Design managing director Ibrahim Ibrahim confirms Fitch has resigned from his current role as director at the group. ‘A departure date hasn’t been finalised yet but it’s likely to be before Christmas,’ he says.

Fitch says he is ‘absolutely over the moon’ at his return to Fitch.

‘I’m sad to be leaving Portland Design, but the job I’ve been offered is the only other job in the private sector that I’d like to do,’ he adds.

A WPP spokeswoman declined to comment on the appointment.

Fitch left the first company to bear his name in 1994, and went on to found Rodney Fitch & Co, which went into receivership in November last year. He joined Portland Design as a director in December 2002.

His appointment could signal the end of a period of consolidation for the Fitch stable. Fitch London, PSD Fitch and BamberForsyth Fitch merged to form Fitch London in November last year.

This was followed by a series of high level creative and managerial departures, including three managing partners – Keith Bamber and Nigel Forsyth, who left in June, and Jane Simmonds, who went in April.

Although Portland Design will not be replacing Fitch, the group remains committed to ‘a fairly aggressive strategy for growth and acquisition’, says Ibrahim.

‘Venice of the North’ takes punt on Elmwood branding