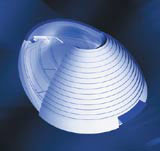 Furneaux Stewart has won the contract to design and build a complex for the Cradle of Humankind World Heritage Site in South Africa, it has emerged this week.

The prime location is the Sterkfontein caves north of Johannesburg, renowned for its globally significant human fossil discoveries. The entire site covers 47 000ha in Gauteng Province, including Mohale’s Gate, seven kilometres from the caves, which is where the main visitor centre will be situated.

This ‘hub building’ – measuring 50m wide, 75m long and 25m high – will use both solid and transparent materials, appearing as an iconic structure from one direction and seeming to merge with the surrounding landscape from the other.

Sterkfontein will feature a separate visitor centre and a working laboratory, with the emphasis on enabling scientists and palaeontologists to further their studies.

The bulk of the audience is anticipated to come from South Africa to begin with, though foreign tourists are also expected.

The attraction is working on an assumption of 400 000 visitors per annum when it opens to the public in 2005, though this is believed to be a conservative estimate.

According to Furneaux Stewart design director John Furneaux, a key facet of the brief is to demonstrate humankind’s ‘common ancestry that predates and cuts across all cultures and identities’. The aim is to create an attraction that will ‘resonate’ on a global scale.

‘Visitors will have the chance to explore and discover their origins,’ Furneaux says. ‘Some questions can be answered, but others can’t. At the end of the day, visitors will leave with the understanding that we all share one world and humanity,’ he adds.

Furneaux Stewart is working with South African architect GAPP on the project.

Rodney welcomes his return to Fitch

Are only fools Russian in, following oil arrest?