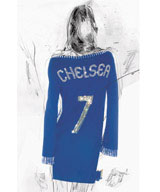 Fortune Street has designed the identity for Vedette, an exclusive women’s football fashion brand that launched last week with a series of events that included an expletive-filled outburst by former sports minister Tony Banks (Lord Stratford of Stratford). Vedette, the French word for film star, makes reference to 1950s icons such as Brigitte Bardot. The brand is the brainchild of fashion designer Katie Walker.