Launched in 2018, FRAHM is the invention of Nick and Emmalou Hussey. The pre-order system adopted by the Bath-based brand attempts to reject the production cycles of mass-market fast fashion. Customers buy in advance of FRAHM making the garments as a way to reduce waste.

As the company looks to expand its collection of jackets, Nick Hussey approached Supple to redesign its packaging. The final result, which features a collection of British beetles, can be found across delivery boxes, packaging materials and gift and owner certificates. The project also features a custom-designed packaging tape. 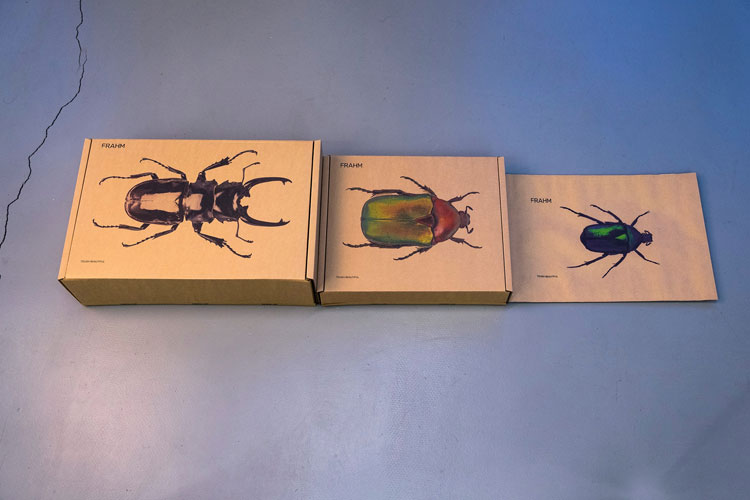 “A bit of theatre”

Supple were introduced to the project having struck up a relationship with FRAHM founders Nick and Emmalou. Creative director Jamie Ellul tells Design Week he has been a fan of the label’s output since its early days and owns several of its coats himself.

FRAHM had previously not branded its boxes, instead opting for a more minimal approach. This new avenue for the brand was aimed at adding “a bit of theatre” to the unboxing process, Ellul says, while also making the packaging feel “less throwaway”. 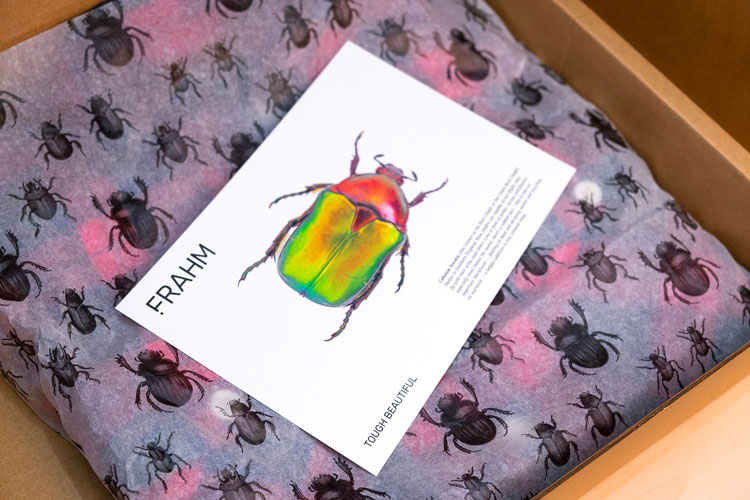 Focused on the “outdoorsy” lifestyle

In line with FRAHM’s environmental commitments, the packaging needed to be low impact, Ellul says. The final result uses a biodegradable cardboard.

Beyond these specifications, Ellul explains the Supple team were given relatively free reign to find a visual identity for the packaging. Since the brand has over the last few years begun to focus more on the “outdoorsy” lifestyle and being in nature, this is how they landed on the beetle motif.

“Being in lockdown, Phil [Skinner, design director at Supple] and I weren’t actually in the same room, but somehow we both hit on the beetle idea separately,” Ellul says. “When we sat down on Zoom we knew it was the way forward.” 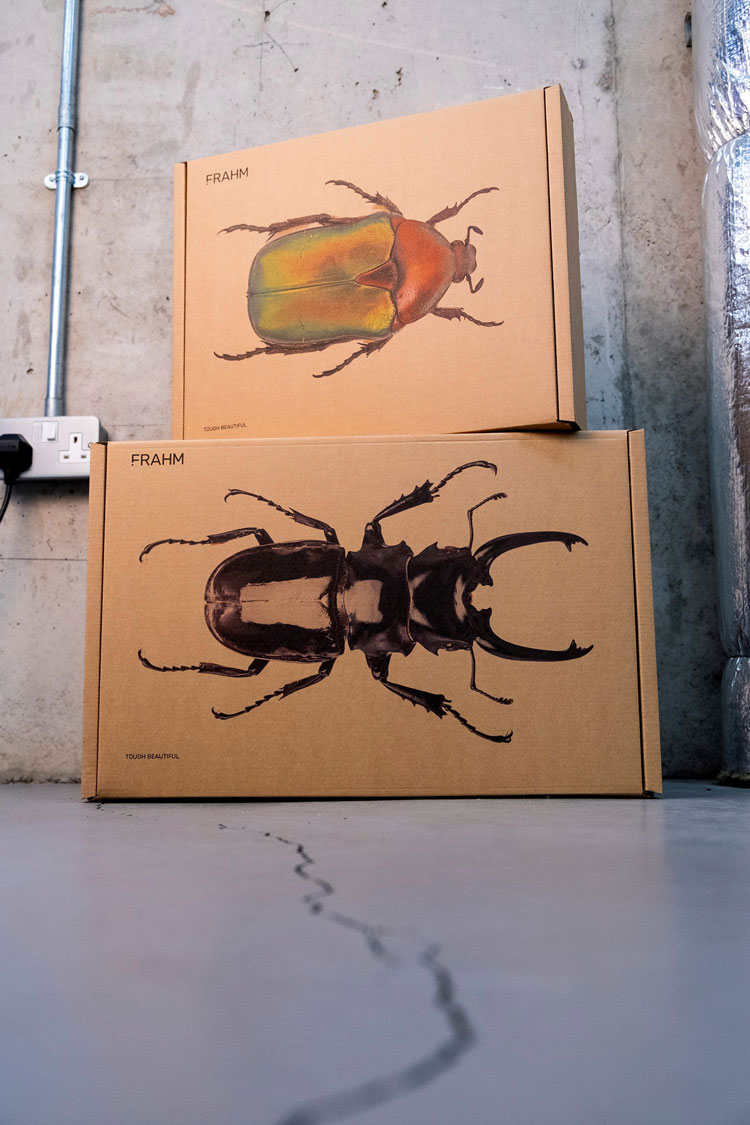 The use of the beetles is a reference to FRAHM’s tagline “Tough Beautiful”. Beetles are “tough little creatures”, Ellul says, and their presence in nature hints at the use of FRAHM’s jackets.

“We blew this beetle imagery up and were so impressed with the details and iridescence – it felt like a great fit,” he says.

As a further homage to FRAHM’s origins, the beetles are all found in Britain. The largest of the three is used for the largest box, and so on. A small description of each species can be found on each one. 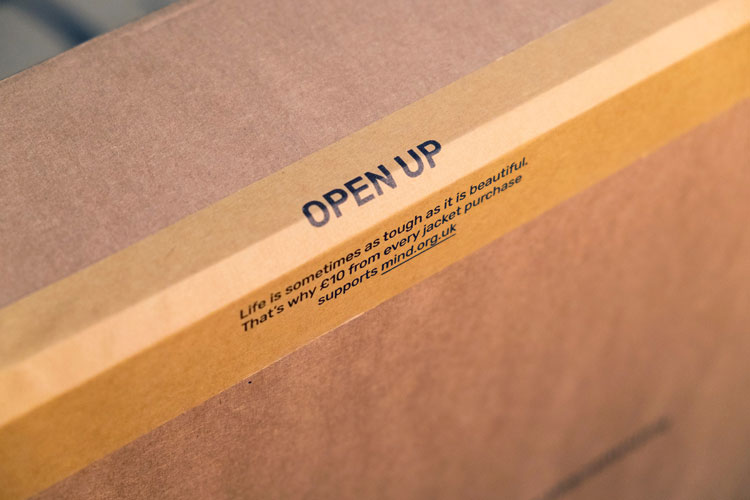 Not “preachy or pious”

Also featured in the project is a custom designed packaging tape. The tape uses the copy line “open up”, which is both an instruction and a nod to the label’s mental health advocacy work.

FRAHM donated a portion of the proceeds of each jacket to mental health charity Mind. It is part of the brand’s wider mission to help open up the conversation about men’s mental health.

“The details we’ve designed on the tape are a vehicle for Nick to talk about his mission without being too preachy or pious,” says Ellul. 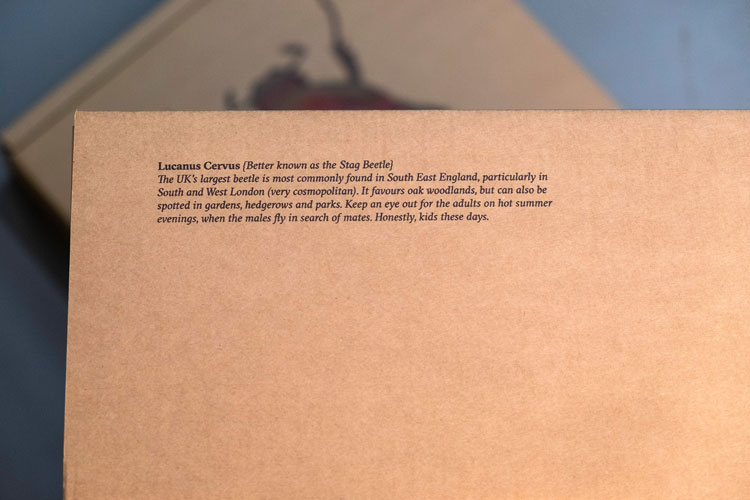 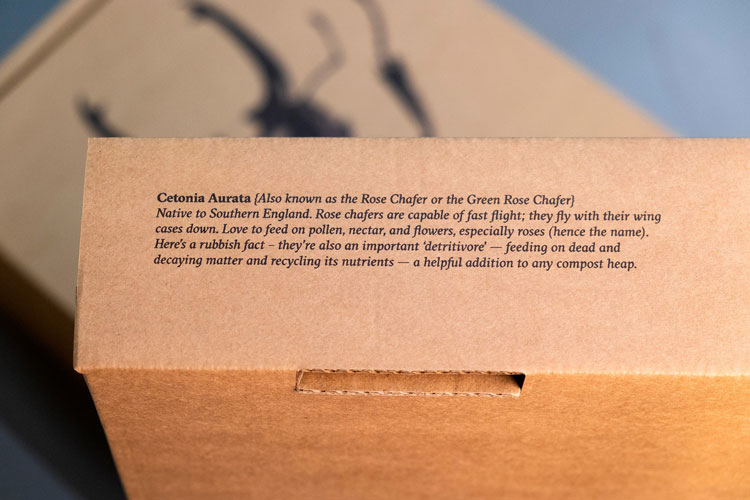