Dating can be daunting at the best of times, but the past year has made it even more complicated. Lockdown restrictions have not always been clear about whether you can even meet up – and a socially-distanced park date is not too appealing in the middle of winter. Add to that general pandemic anxiety, and endlessly scrolling through apps may not seem too appealing right now.

In response, several popular dating apps have made design interventions to help users find new ways to connect with people and form relationships.

One dating service though, Match, is celebrating its 25th anniversary by making wholesale changes to its brand, positioning and user experience while placing an emphasis on the old-school ideas of romance. 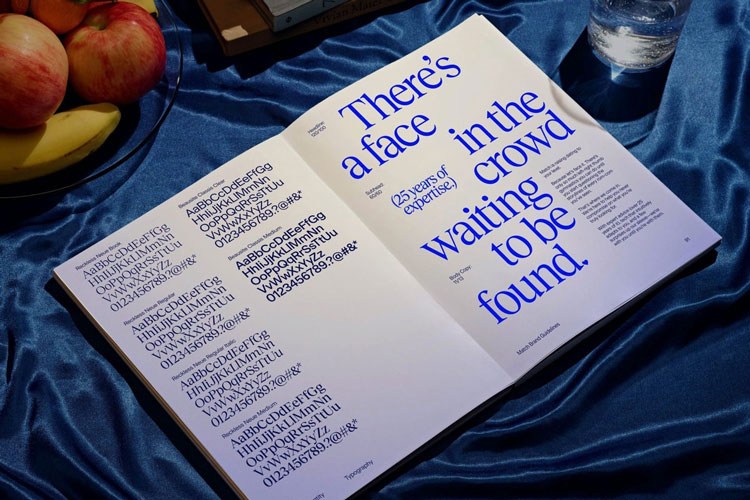 The redesign was partly driven by a reaction to gamification in the sector, according to Collins partner and creative director Nick Ace. “The gamification of all the other apps has left one of the biggest values on the table – which is romance,” he says. Ace briefed the team to think of the Match app more like a service. “It’s on your coffee table or your night stand,” he says. “It’s waiting for you but it’s not splashing in your face.” The team came up with the idea of a concierge-like service for the app, inspired by European hotels in the early 20th century and the worlds of signage and wayfinding. 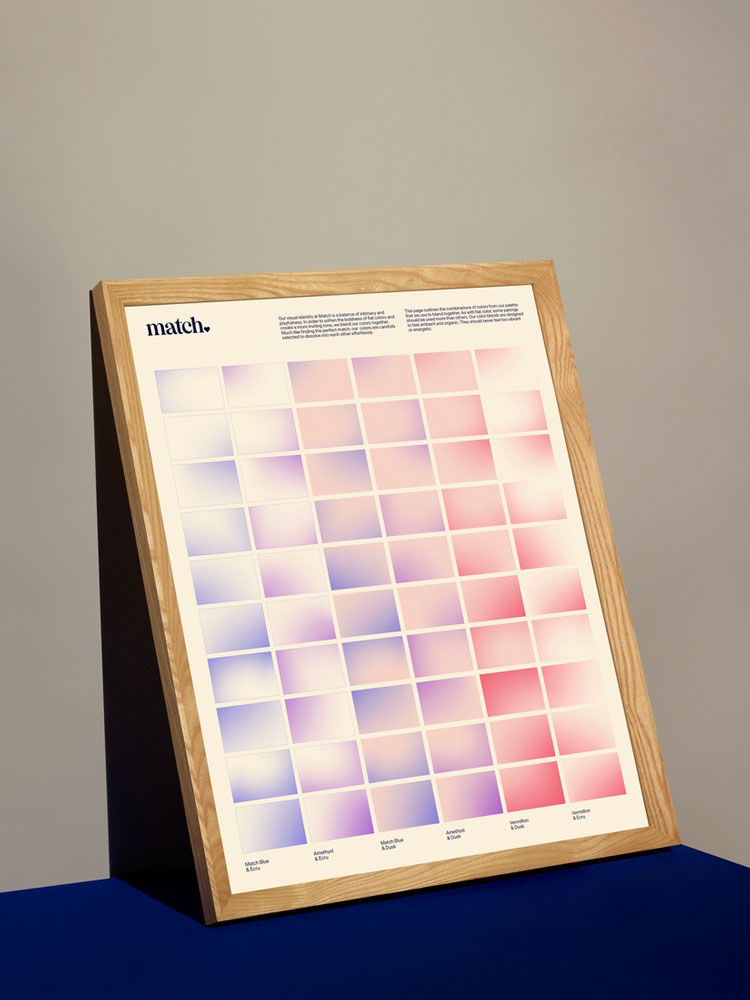 Visual details are a reponse to the increasingly “loud” sector. “Everything is screaming at you,” Ace says. “It feels more like a casino than a quiet place where you want to engage with people.” The previous branding’s ‘Match blue’ has been retained, and is now complimented by a palette of quieter shades that you might find “at a restaurant, or cafe, or in a living room”. The Designers Foundry’s Wulkan was chosen for the typeface, after the team explored around 100 options. “It was completely intentional to have the ‘a’ nestle into the ‘m’,” Ace says of the wordmark.

The heartshape icon has moved from the top of the wordmark to the bottom, which signifies a “confident fullstop”. These details have been incorporated into the identity and onboarding experience, where Ace believes they make a true distinction to the more “addictive” qualities of rival apps. “We’ve taken a big leap in terms of not making something loud and so in your face,” he says. 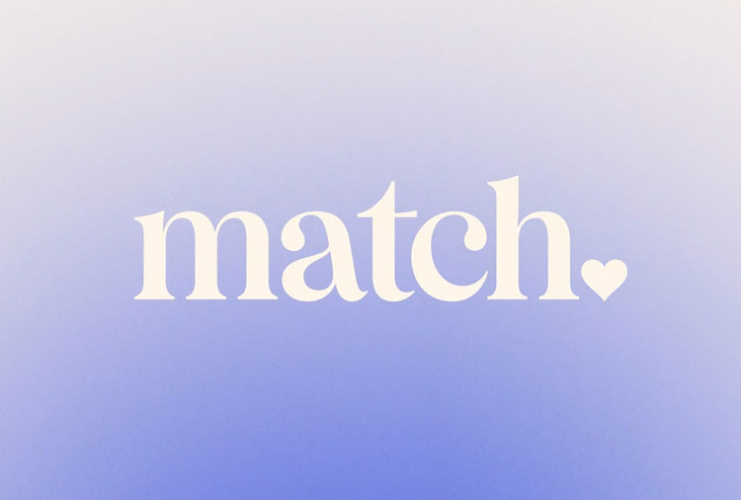 The app, like many others, has released multiple lockdown-related features including video-chat function Vibe Check. Match vice president of brand Ayni Raimondi says that these features were a response to the recurring question of: “Is dating cancelled?” The positive up-tick in use would suggest otherwise. Match users’ desire to use videochat jumped from 6% to 69% before and after initial lockdowns. “More than ever before, people are looking for meaningful relationships,” she says.

The app’s target audience ranges from 30 to 50, which means users may have more life experience than younger single people, Raimondi says. And while many of the features are a result of Covid, she believes that they will have a longer-lasting impact. Take the dating preferences feature, which allows people to fill out in advance what they would be comortable with – only video dating or going for a walk in the park, for example, to avoid awkward developments later.

Real Talk meanwhile poses questions around conversations that people want to get into, according to app data. These vary from weather to family and evolve over time. During last year’s American election, users might have been asked about whether they would date someone with opposing political beliefs. (Data conclusively showed that they did not, Raimondi says.) These features aim to “nurture deeper connections”, she adds, which is especially important during a pandemic. “It’s technology that delivers humanity.”

Meanwhile other leading apps have been rapidly adapting to meet their users’ changing needs. Dating app Hinge found that 70% of its users were interested in virtual dating at the start of the pandemic. “We immediately began normalising digital dates with our community,” Hinge CMO Nathan Roth says. Social content included tips on how to date from home, including advice about what to expect on a virtual date and how to maintain sparks while remaining physically distant.

The app’s product launches are informed by Hinge Labs, its internal women-led research department. The lab aims to help the community “streamline their in-app experience” and is responsive to what’s going on in the world. After seeing the popularity of Zoom dates last year, the Hinge team designed a set of background images of popular date spots – think sunny beach picnics and secluded camping fires – for the video platform. 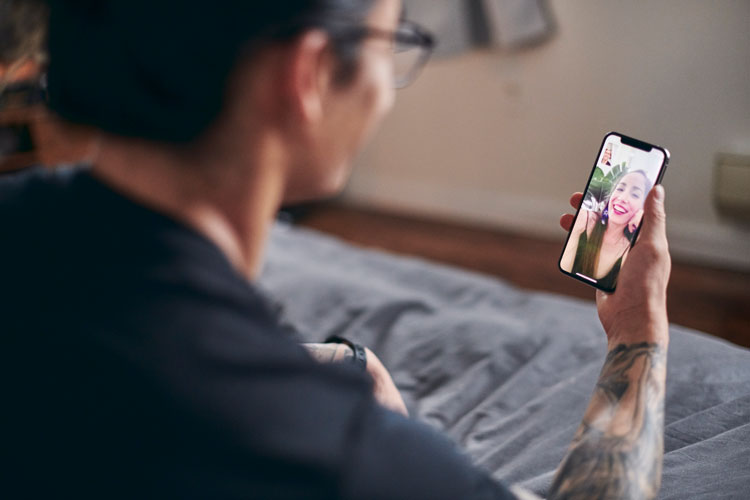 Its efforts to normalise digital dating seem to have worked. In March 2020, the app saw a 30% increase in messages among users despite the onset of the pandemic, according to Roth. There were also some potential mental health benefits: more than half of users said that talking to new people outside of their community helped combat feelings of loneliness in the past year. Meanwhile, more than two-thirds of users are thinking “more deeply about the type of person they want to be with”, Roth says.

Perhaps the most significant launch was the Date from Home feature, which launched in April 2020. The tool allowed users to indicate when they would feel comfortable using video chats with a match. “It eased the sometimes awkward and vulnerable transition from messaging to meeting face-to-face digitally for the first time,” Roth says. Those feelings of butterflies are not limited to a pandemic of course, and the tool will likely remain even when it’s safe to meet up in real life.

More than half of Hinge daters used the feature. And in April, the app launched a full video roll out which allowed an in-app video chat and call experience. Despite initial fears that video dates would be awkward, Roth says that take-up has been positive. “Now two-thirds of Hinge users see video chat as a fun, low-pressure opportunity to get a ‘vibe check’ of their compatibility with a match on the app,” he adds.

“We wanted to be a digital brand that feels analogue” 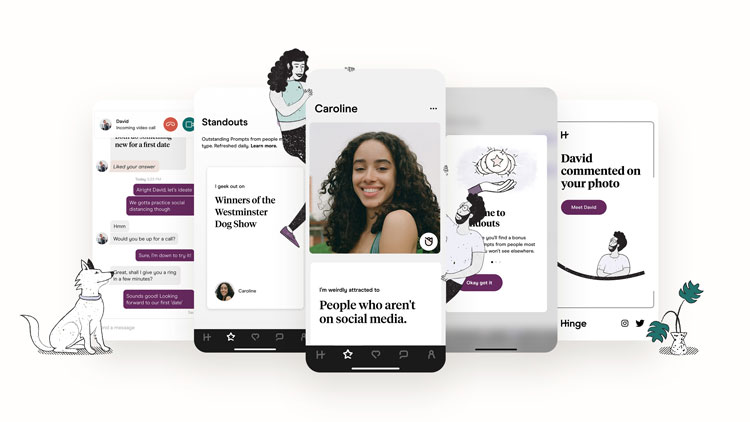 In December, 2020 Hinge – which positions itself as the app “designed to be deleted” – revealed its latest redesign. “We wanted to be a digital brand that feels analogue,” Roth says, and the new design aims to “reflect the real world where dates actually happen”. A nature-inspired colour palette hopes to reduce distractions and focus on “what matters most” while illustrations now have a “more human feel”, Roth says. In-app pictures showcase people with “imperfect features”, for example.

Following the redesign, Hinge released two more features. Standouts provides people with a daily line-up of people who best fit the user’s type, based on previous likes and comments. And Roses allows people to show a “stronger interest in a potential match” by sending a virtual flower, Roth explains. Hinge Labs found that the digital flower-giving doubled people’s chances of going on a date with the recipient.

In September, Tinder launched a first-person interactive series, billed as the “ultimate ice-breaker”. Swipe Night was first released in the US, having been built on an “accelerated schedule” in around six months, a spokesperson from the app says. Big names were brought in: it was directed by Drake collaborator Karena Evans and scripted by comedy writers from Netflix.

The story followed a group of friends – played by different Tinder users – in the final hours before an asteroid hits Earth, a suitably apocalyptic feel for 2020. “If the pandemic has taught us anything, it’s the power of conversational common ground powered by shared experience,” according to Tinder. 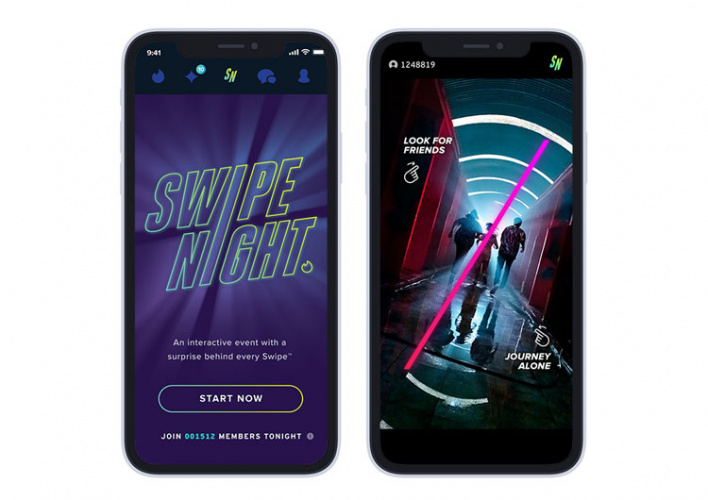 Unrolling like a choose-your-own-adventure story book, users had seven seconds to make a decision. After each scenario, those key choices were added to a user’s profile which allowed for “plenty of opportunity for post-apocalyptic banter”. This helped to remove the “dreaded ‘hey, how’s it going?’ intro message”, Tinder adds.

Swipe Night was not only a reaction to the difficulties of lockdown dating, but a reinvention for Generation Z. Tinder is no longer new – established in 2012, the app is now almost a decade old. “Back in 2012, we invented the ‘swipe’ and now we’re reinventing for the current generation,” the spokesperson adds.

Speed-dating in a pandemic 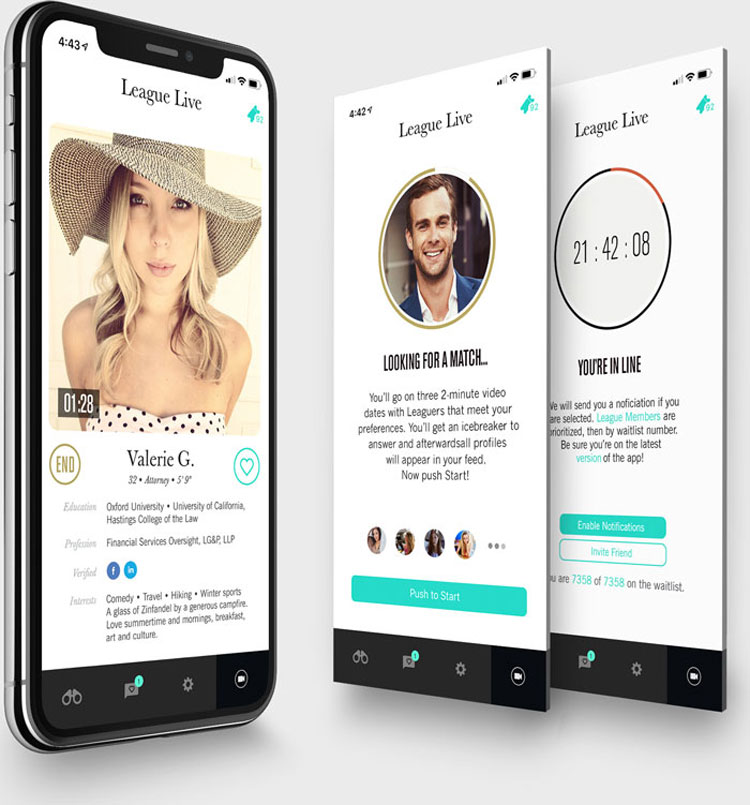 Just before the world went into lockdown, The League launched a virtual speed dating series. The League Interactive is a twice-weekly feature from the app which promotes “intelligent dating” among the professional community. It was initially inspired as a virtual version of the app’s popular speed dating events, which were popular but impossible to scale, app founder Amanda Bradford says. “We thought: What if we could do them all virtually? People could do it from their couch.”

Users go on three three-minute long dates where they can either match or move afterwards. In the experience, there are ice-breakers based on a New York times article The 36 Questions That Lead to Love. Questions include: “Do you have a secret hunch about how you will die?” and “How do you feel about your relationship with your mother?”  Bradford says half of people used these prompts. During the pandemic, the app saw a 25% increase for the League Live.

In addition to the virtual speed dating, The League has regularly organised virtual live events from cooking classes to acting lessons, which aim to get people talking. “We made it feel like there were still two events for our users even though there was nothing to do,” Bradford says. Other features added during lockdown have fostered a sense of community on the app. There’s the Ask Your Concierge feature, which provides in-app guidance to Covid dating, from official regulations to tips from other users. 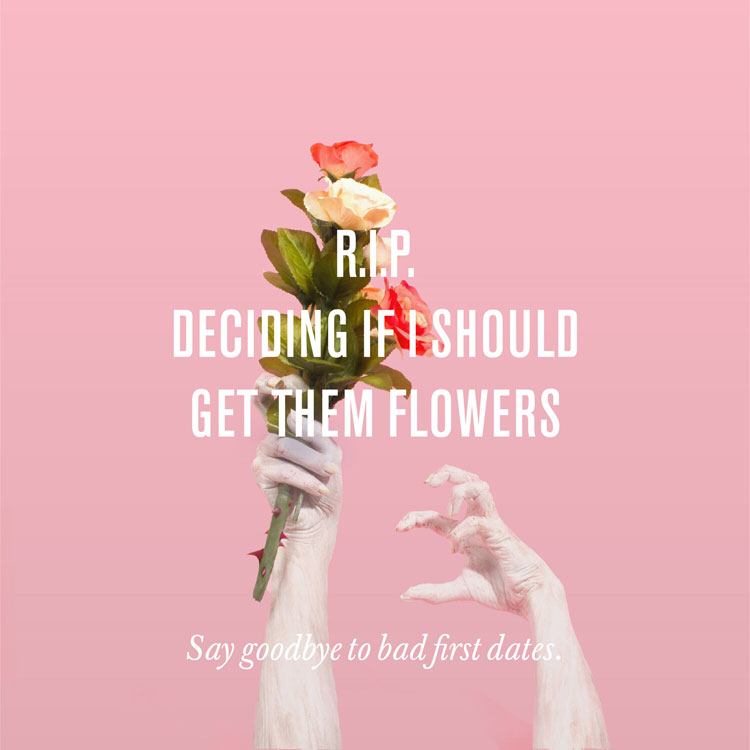 The League head of product Laura Stover says that some users were apprehensive about the prospect of virtual speed dating. “We thought about how we could break that down a little bit,” she explains. People can see what they look like before the date picks up in their front-facing camera, for example. There are also profile views at the bottom of the screen which show people waiting in line.

One feature the team received most feedback about was the time. “Guys wanted more time, girls wanted less time,” she says. In the end the time was moved from two to three minutes. Four minutes was deemed too long, and if a date was going badly, people “almost liked being cut off at three minutes”.

In keeping with other apps, The League also added a video function and found that people were talking on average for around 40 minutes at a time. “We did see these conversations as dates,” Stover says. “People are slowing down more, they’re not meeting as quickly in person obviously and these features help people get to know each other better before they meet in person,” she says. “It’s more like traditional courtship.”