Produced in collaboration with paper company Fedrigoni and London’s Waddington Custot gallery, Peter Blake: Collage launches alongside a retrospective of the artist’s work at the gallery. 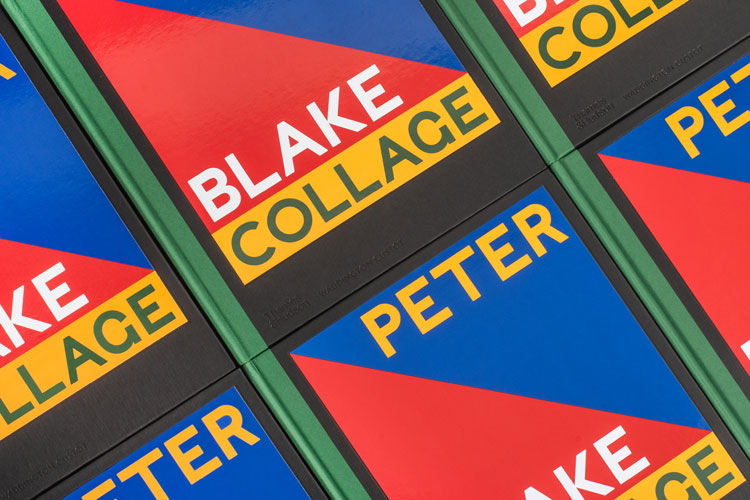 Blake is perhaps best known for co-creating the cover of the Beatles’ album Sgt. Pepper’s Lonely Hearts Club Bank and Band Aid’s Do They Know It’s Christmas? single. As well as designing covers for bands including Oasis and The Who, Blake has created kits for Chelsea FC and numerous fine art installations.

This new book contains a foreword from Blake’s contemporary and friend David Hockney, an interview with the artist himself as well as new photography of his studio in Chiswick, west London. 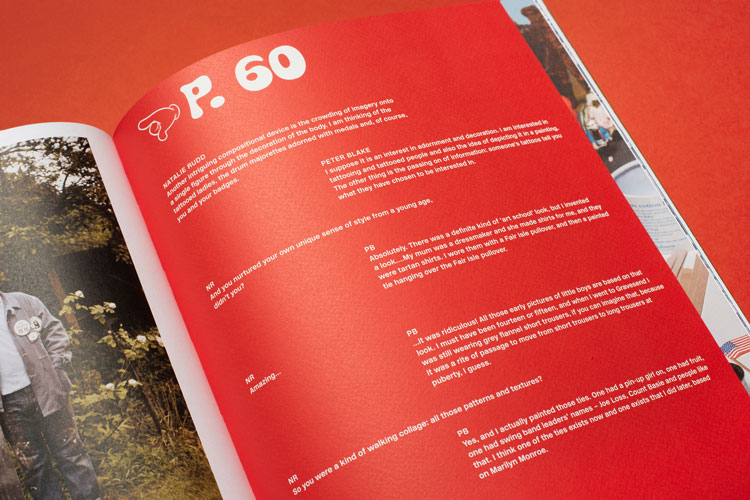 According to Praline founder David Tanguy, Peter Blake: Collage sought to convey the artist’s “DNA and essence” in a playful way. “That means embracing pop art, colours and interesting textures, especially typography,” he adds. The book takes a thematic rather than chronological route through his work.

Working with the book’s editor Clare Preston, the team at Praline drew on Blake’s interest in typography. The studio’s senior designer Al Rodger explains that the book’s typefaces reference Blake’s own work, the time periods he was working in as well as his own studio’s collection. 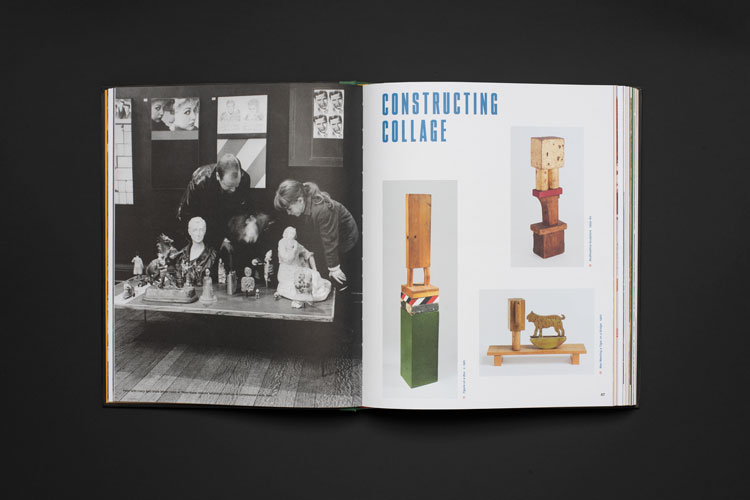 The book uses around thirty different typefaces, many of which have been customised or drawn especially for the new book. Some of these are direct references to Blake’s work. Stencil, for example, was designed in 1938 and appeared frequently in Blake’s work particularly his late installations.

Other choices sample from his work, Rodger explains. Blake has an interest in Elvis and has collected memorabilia related to the singer over the decades. In one of the artist’s Elvis installations, the Praline team noticed a Christmas postcard which had an unusual font choice. 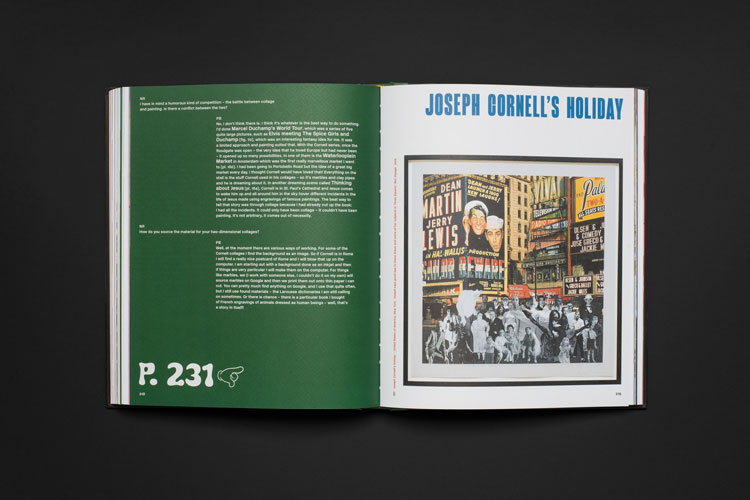 “We started to sample from a very commercial work he appreciated,” Rodger says of the design. “He’s not overly bothered by the aesthetic – it’s more about if it’s true to what it’s used on.”

Other typefaces include references to Blake’s own biography. The artist has frequently explored work on targets and flags, and carried out service in the Royal Air Force (RAF) as part of his national service from 1953-56. 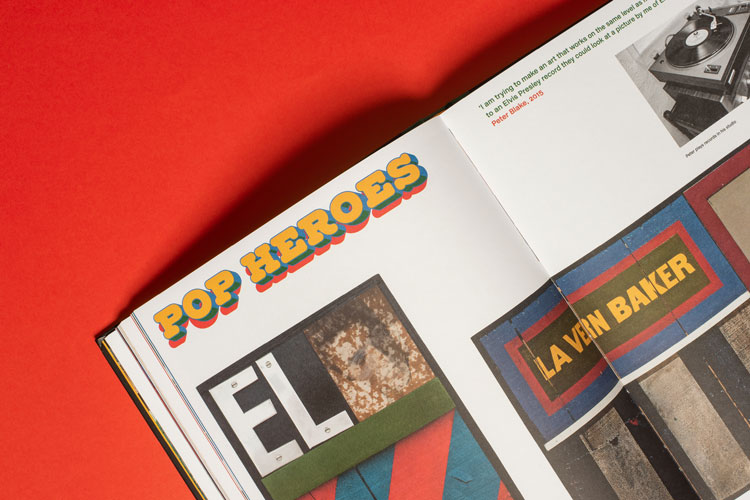 The studio researched lettering used in the RAF in the 1950s and customised its own typeface, based on signage that appeared on aeroplanes. “None of that is in his work but it’s connected to who he is,” the designer says.

One section entitled Pop Heroes plays on Blake’s use of depth and perspective, according to Rodger. Incorporating the typeface Dr Slab – whose customisations mean you can create around 50 or 60 variations – the studio chose a version that incorporated the book’s blue, red, green and yellow colour scheme. 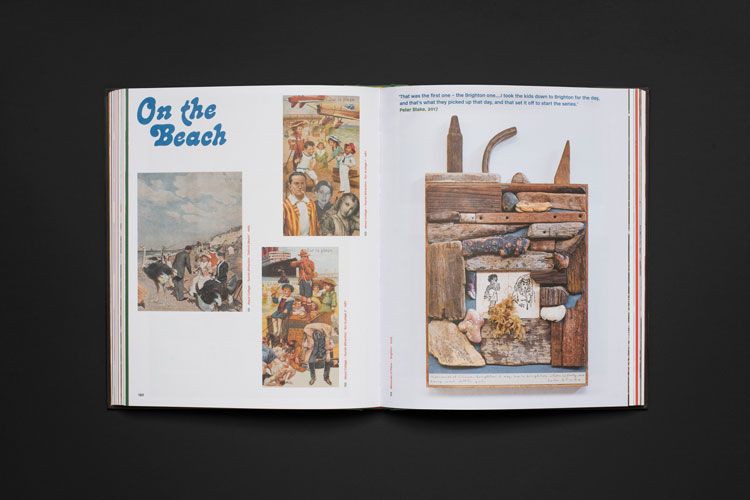 A similar example can be found in the pages entitled On the Beach, which seeks to evoke a seaside feel. Rodger explains that the team looked at vintage postcards but none of them worked exactly.

Instead, the studio used the typeface Lazybones, whose capitals are “very generous in their gestures”. Used as a display title, the typeface became “romantic and nostalgic”, Rodger says. “Maybe it’s not ever been used for a beach postcard, but it feels like it could have been,” he adds. 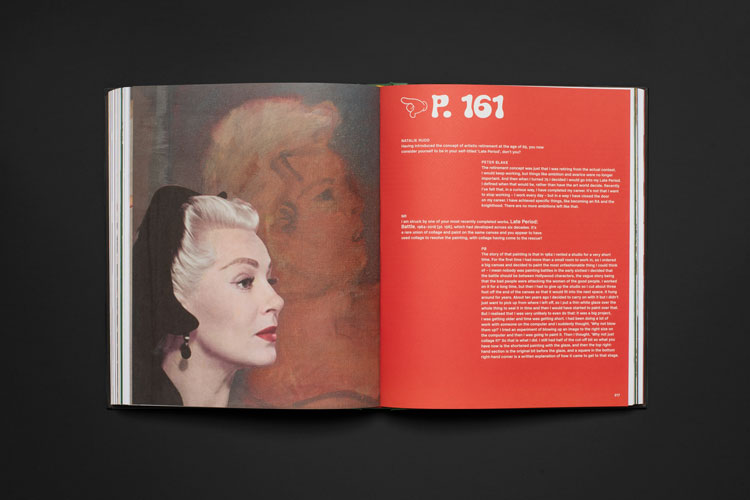 For body copy, Praline chose New Rail Alphabet – a revival of the British rail typeface originally designed by Margaret Calvert in the 1960s – because of Blake’s interest in railway signage.

The typeface on the book’s cover is another creation from Praline. It’s inspired by English type designer William Caslon’s first sans serif typeface, explains David Tanguy. “Only three characters existed and we based it on that and created others,” he says. “The link is that it’s very British and provides a link to history.”

Other details seek to capture Blake’s “expression and playfulness”, Rodger says. The colour scheme is taken from Blake’s work on actress Marilyn Monroe, for example. This also became the reference for the geometric book cover design.

The artist’s work with Disney is also featured in some of the page elements, such as the guiding icons inspired by Mickey Mouse hands.

The team has also worked to create an unpredictable journey through the book for the reader, according to Rodger. The interview with Blake is sequenced throughout the pages, for instance, so that “you won’t necessarily know what’s coming next”, he says.

This content reappears at different times – if there’s a piece about butterflies, the next page might provide information about Blake’s interest in the insects, as described in his personal essay.

Key to this was the material design, the result of the collaboration with Fedrigoni. Five 8-page sections provide an immersive look at Blake’s studio, Rodger explains, which is marked by a sudden shift to coated paper. In total, seven different paper materials have been used as a way to echo the diversity of the collage form, according to the team.

Throughout the process, Praline considered asking Blake to handwrite some of the book’s title but chose not to because it had been done before. The artist however ended up writing a dedication, which he handwrote on a piece of paper. “We put it on the very first page of the book,” Rodger says. “It completed itself in a way.”

Peter Blake: Collage is published by Thames & Hudson and is set to be released in August.