Digital design studio Rehab and French ad agency Herezie have collaborated on Pill-iD, an app which allows people to scan MDMA-based drugs through their phone and identify potential risks.

According to Rehab CEO Rob Bennett, the app’s development was timely given the planned opening of UK clubs and festivals in June.

“Our assumption is that drug use will continue to happen and we wanted to show how technology could help people make the right decisions for them,” he adds. 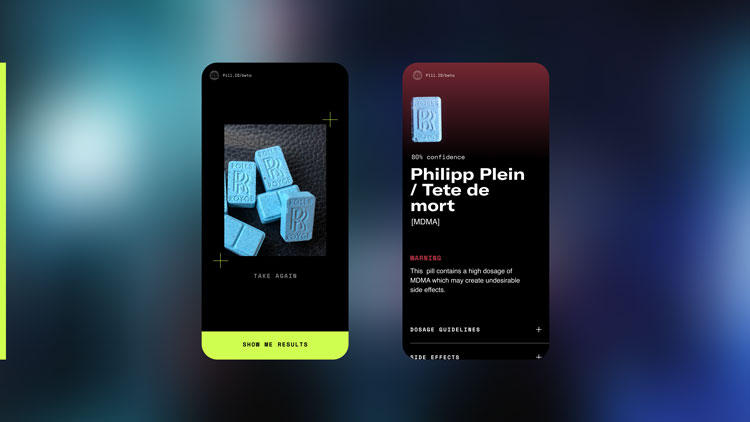 ONS data shows that drug taking maintains high levels in the UK, with around 1.3 million adults aged between 16-59 using a class A drug (MDMA’s classification) last year. This gave Rehab and Herezie the idea to harness technical advancements in both mobile technology and also AI.

Bennett points to a recent Google project which allowed people to identify almost 300 skin conditions using a phone camera thanks to AI-driven datasets.

Pill-iD is the latest project to emerge from By The Network, a cross-agency network which delivers briefs across multiple disciplines.

To use the app, people simply take a photo of the pill or upload an existing picture. The app’s machine learning foundation – Google technology TensorFlow.js – then attempts to identify pills by searching French narcotics database, Nuit-Blanche.

These pills often have a distinct shape or colour, which can be used as identifiers. However, as Nuit-Blanche and Rehab make clear, completely accurate identification and therefore safety cannot be guaranteed.

The app has been designed to be “educational, factual and unbiased” and not in any way “focused on entertainment”, says Bennett. It also seeks to avoid any encouraging or patronising language. There were three main principles, according to the designer.

Navigation had to be “clear and simple”, he says. “Our audience may be intoxicated at the moment they engage with the experience,” Bennett adds.

The information provided to users also had to be direct, specifically around drug type and its level of danger. Content from Nuit-Blanche has been prioritised according to these needs.

The app also had to be accessible. “Taking a photo of a drug in public may be difficult to do discreetly and effectively, so we ensured a photo could be uploaded from a user’s photo library as well,” he adds. All information and photos uploaded are anonymous, according to Rehab.

Another key aspect for the design was the “need for trust”. “It needs to look and feel trustworthy,” Bennett adds. “We have assumed a broadly younger, digitally native audience and the design reflects this.”

A conversation starter about drug databases 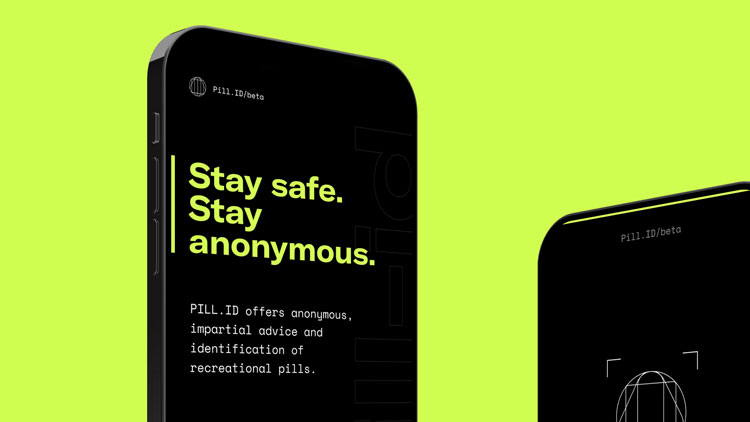 There are of course limitations to the technology. “It doesn’t and can’t analyse the chemicals within each individual pill that you photograph,” Bennett says. “No technology can do that from an image.”

He adds: “We are very explicit in saying that accuracy cannot be guaranteed because the only way to guarantee safety – regardless of technology – is by not taking a pill in the first place.”

While the app is currently a working prototype, a full launch is set for this winter. Bennett says this time will be crucial in developing database accuracy and potentially including “different types of pill and more imagery”.

The studio is also looking at how the app could access different datasets according to country, though Bennett believes there is no single global database as of yet.

Longer term ambitions for the app could be to integrate with health organisations and public health services like Talk to Frank, according to Bennett.

“The aspiration for the Pill-iD prototype is to see it used as a catalyst to start a central, global drugs information database of some description, that is entirely factual, rather than informed by politics of opinion,” he adds.

Bennett says: “As the world moves ever closer (digitally, at least), we feel that the implication and impact this sort of dataset could have is well worth exploring.”

You can find out more information on Pill-iD’s website.