Women’s glossy magazine Glamour turns 80 next year, and has been through many iterations in its long life. Founded in the US in 1939, it started out as a high-end publication sharing stories about the lives of film stars, originally titled Glamour of Hollywood.

It changed its name to Glamour in 1943, as it began including more articles on fashion, beauty and then later psychology, health and wellbeing.

Following its star-focused days, it was a title aimed at ambitious women, even holding the strapline “for the girl with the job” in the 1940s – a phrase which would have once been intended as fiercely feminist but now seems cringingly condescending.

That strapline has since gone, but Glamour has retained its mantra of being a monthly woman’s magazine with a more sophisticated tone – owned by publishing house Condé Nast, the news-stand title is available to buy in 18 different countries and reaches nearly 30 million women every year. It prides itself on talking about fashion, beauty, celebrities, psychology, careers and sex in a “practical and accessible manner”, “wittily, cheerfully and without vulgarity”.

Admittedly, the magazine has historically taken a loftier tone than some of its contemporaries, which have notoriously plastered “10 ways to please your man” or “the best orgasm tricks” on their covers.

But in recent years, weekly and monthly print magazine sales have dwindled; while beautiful, coffee table, quarterly journals may thrive and live on, sales for regular print rags are going down as more people opt for online zines and social media for fashion and beauty inspiration. 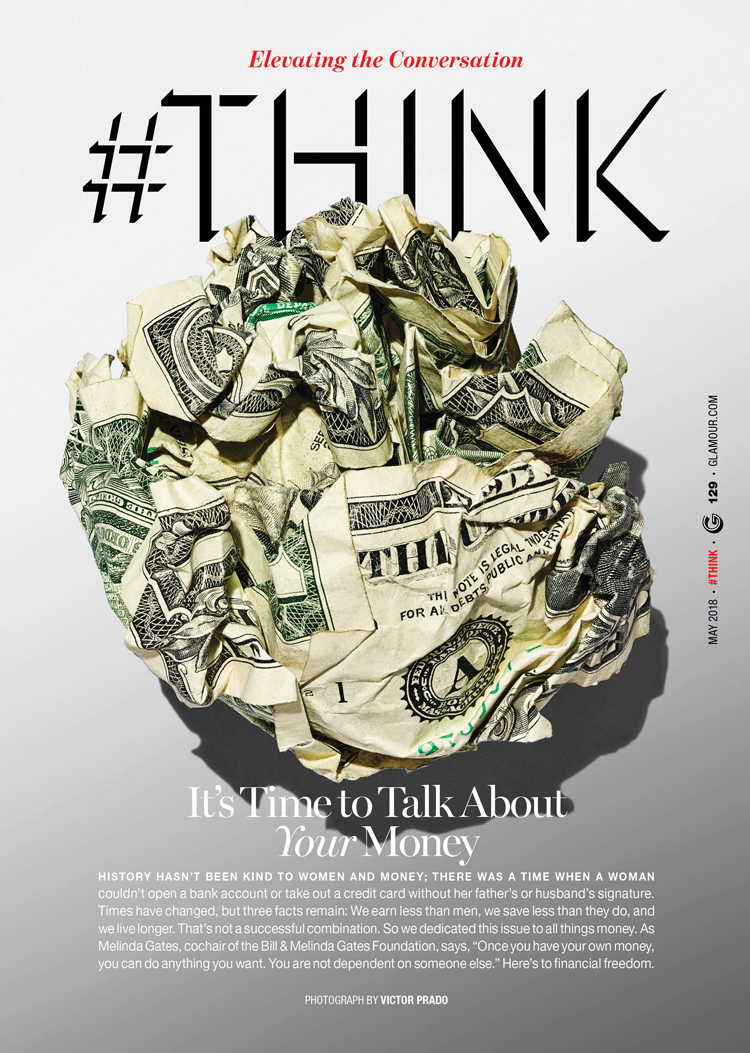 So how can an 80-year-old women’s magazine keep up with the flurry of Instagram “influencers” and blogs? This year, Glamour has taken on new editor-in-chief Samantha Berry, and at the same time revealed a redesign of its print publication, soon to be followed by its website.

Glamour’s creative director Nathalie Kirsheh is behind the redesign and rebrand of the magazine – she says that the main aim of the new look was to signify how Glamour’s content is changing to reflect a “pivotal time for women” in 2018. The last year has seen major steps made worldwide to combat sexism and sexual harassment, with scandals in Hollywood and Westminster called out, gender pay gaps revealed and talented women celebrated as part of the centenary of women’s suffrage. 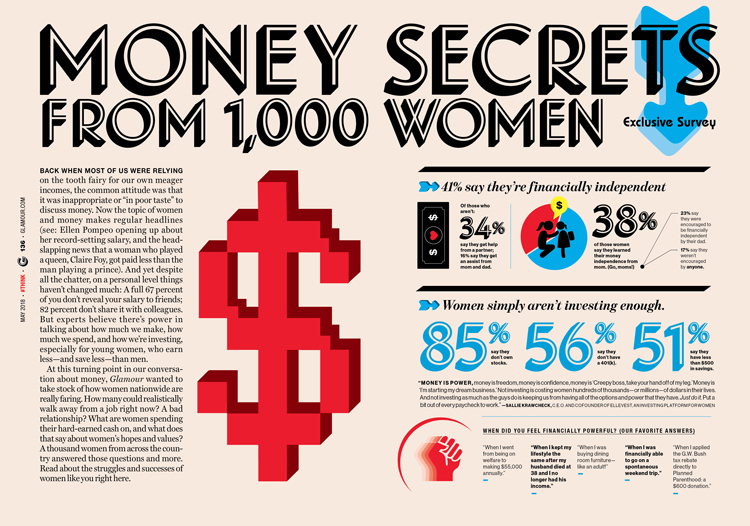 “We have broadened the spectrum of topics and conversation in the magazine, including politics, breaking news, and beyond,” Kirsheh says.

She adds that the look of the magazine was designed to reflect this. A “stark” and “minimal” aesthetic has been given to the print edition, which looks to make it stand out from other news-stand glossies, and give it a more “untraditional” approach, she says. 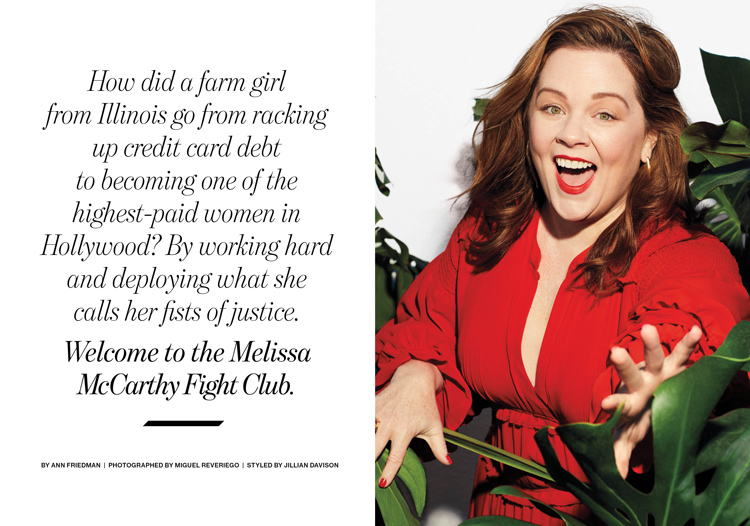 The busy covers incorporating many colours and cover-lines in different typefaces are gone – May 2018’s cover is white, with black and red text all set in the same serif typeface, and one central portrait image. A few, sparse pixelated symbols also grace the cover.

The new Glamour masthead is monochrome and line-drawn, with a stark black drop shadow behind it, accentuating it. It has a cubist feel, and is set in typeface Landmark, designed by Jonathan Hoefler, which looks to be “geometric but also conservative and one that embodies personality”, says Kirsheh. The simple nature of it means it can also be used as a backdrop for illustrations and different iterations when used on digital platforms, she adds.

A new strapline looks to open up the magazine to a potentially wider audience than it already targets; “Authentic. Accessible. Relevant” looks to represent the new ethos of the magazine, and a refreshed set of “values” for a “new era” of women. 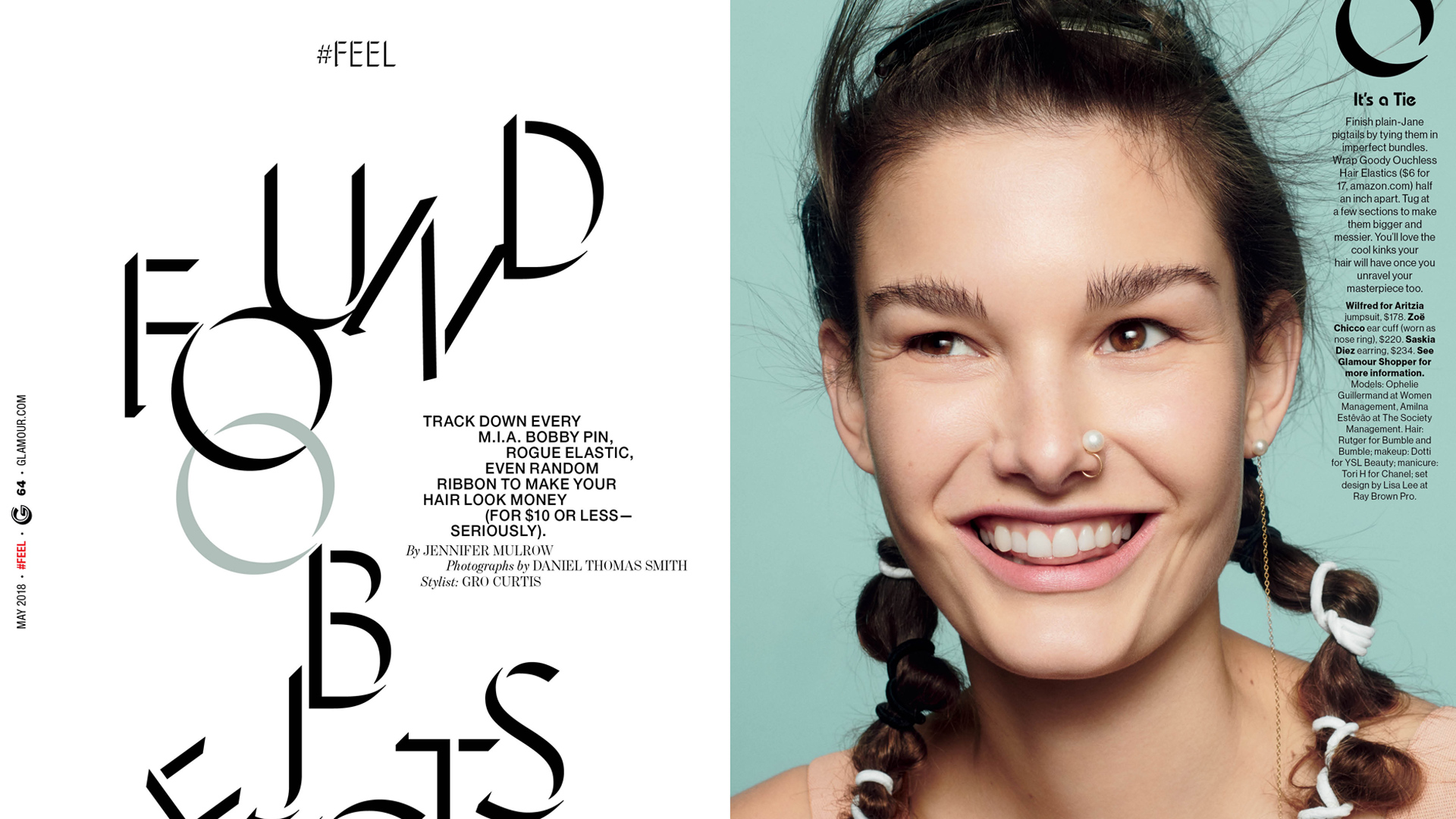 While the magazine and accompanying website is primarily aimed at 18-40-year-olds, the redesign and new content strategy are hoping to welcome readers of other ages too. As a result, Kirsheh has attempted to remove elements of the design which may have previously seemed gender-specific or juvenile, such as the colour palette, swapping out pink for red.

Accompanying the shift in content is a new structure to the magazine. The traditional print format encompasses front-of-book, the well or centre of the magazine, and back-of-book; the front sees short news stories and editorials, the middle sees long, in-depth, cover features and the back sees mostly advertising and short content that follows the main bulk of the magazine. 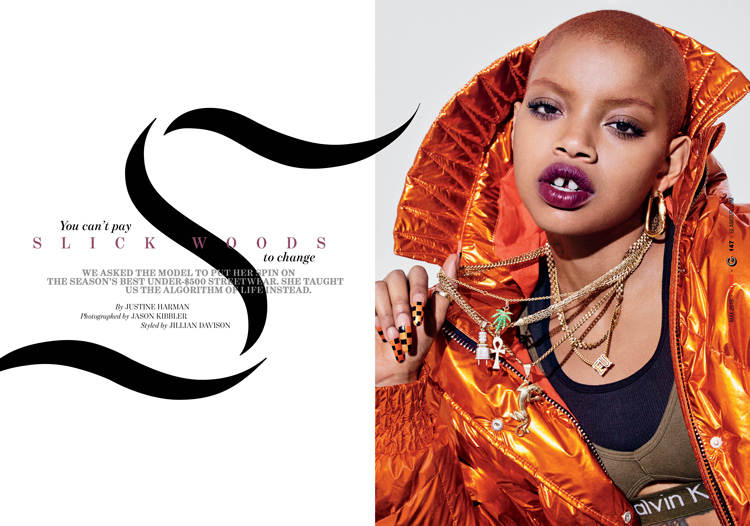 This format has been ditched, and instead four sections – Look, Feel, Live and Think – have been established, which is more akin to how a digital publication might be organised. Each section features longer reads and features, rather than it all being concentrated in the middle of the magazine.

“For this, I have set a clean, minimalist backbone design, which gives the freedom to evolve and develop it over the next few months,” says Kirsheh. “My goal is to continue building a curious experience by creating engaging imagery as well as type that cleverly interacts with photography.”

This “minimal” aesthetic, such as with the logo, aims to allow more space to develop the design digitally. “I admire when a printed experience seems like it could animate, and that is how we intend to bring these stories and visuals to life in the digital space,” she adds. 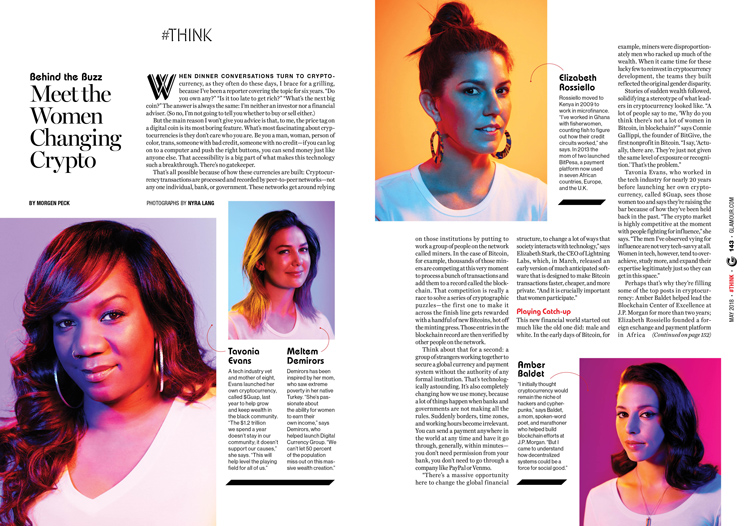 Equally, Kirsheh has understood the need to keep the magazine “contemporary”, she says, and has borrowed content ideas from the online space; alongside in-depth features, there will be stories that are just “one amazing image and a few words” that “keep the reader curious for more”.

While keeping up with the likes of social media “influencers” and blogs is tricky, Glamour’s new look and content strategy aims to bridge a gap between quick hit and in-depth read. 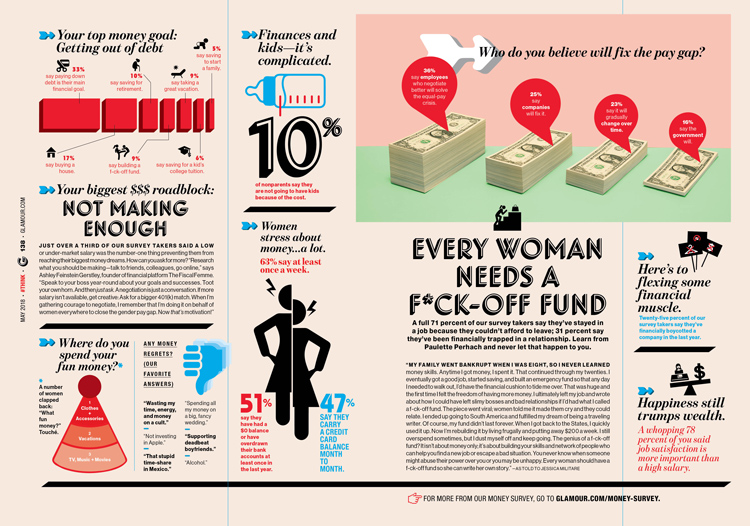 “It is true that social media has a certain appeal due to its accessibility and sense of instant gratification,” she says. “We are trying to harness these platforms with curated content and a better visual experience. Creating quicker reads and hits is essential – but so is providing real journalism that takes a deep-dive on many issues.”

This is only the start of a major redesign for Glamour. The May 2018 print issue, which has just launched, is the first stage of the content and design overhaul, which will be revealed in full for the September issue. A redesign of Glamour’s website will accompany this, and a rollout across video and social media platforms. The redesign is currently only for the US market. 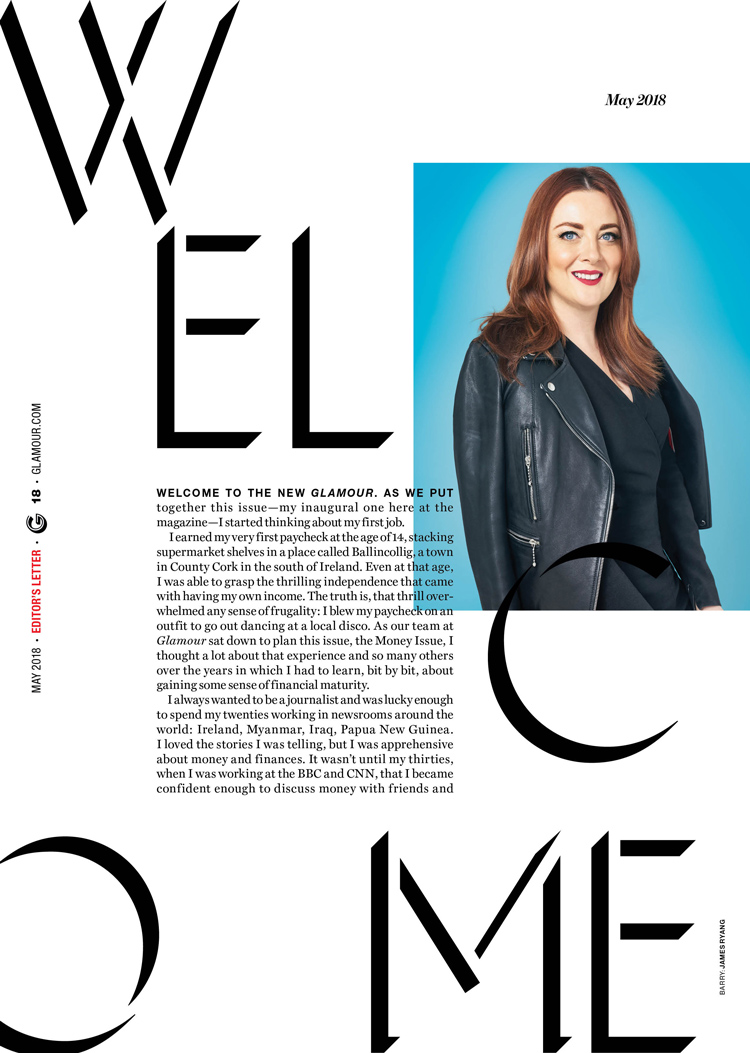 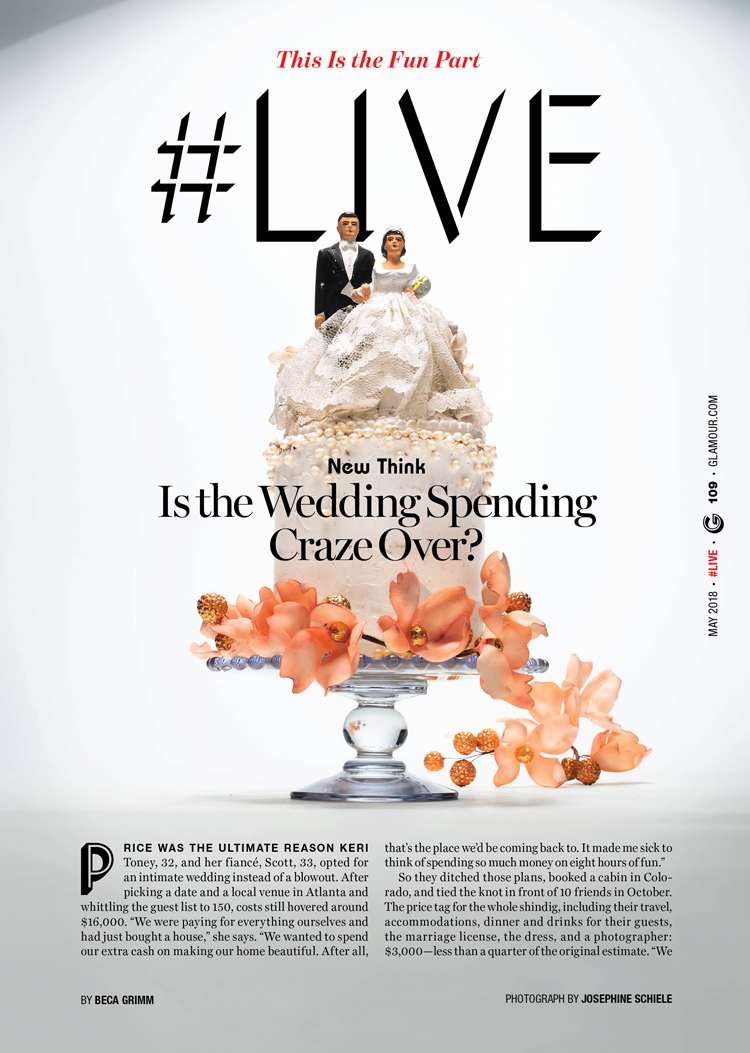 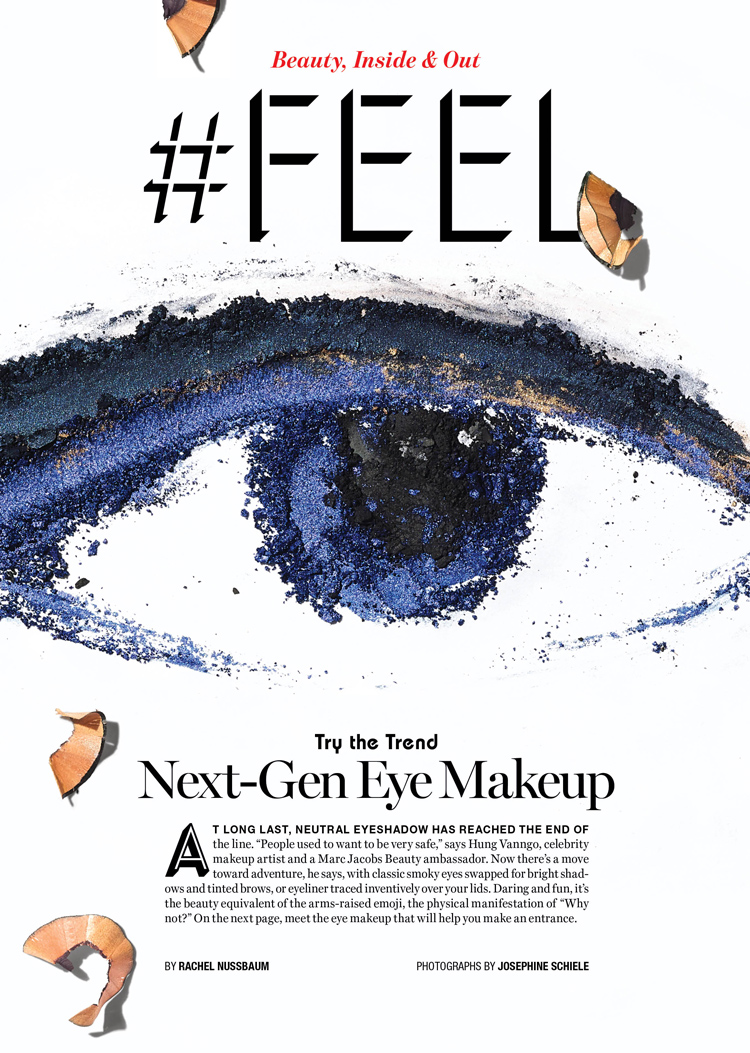 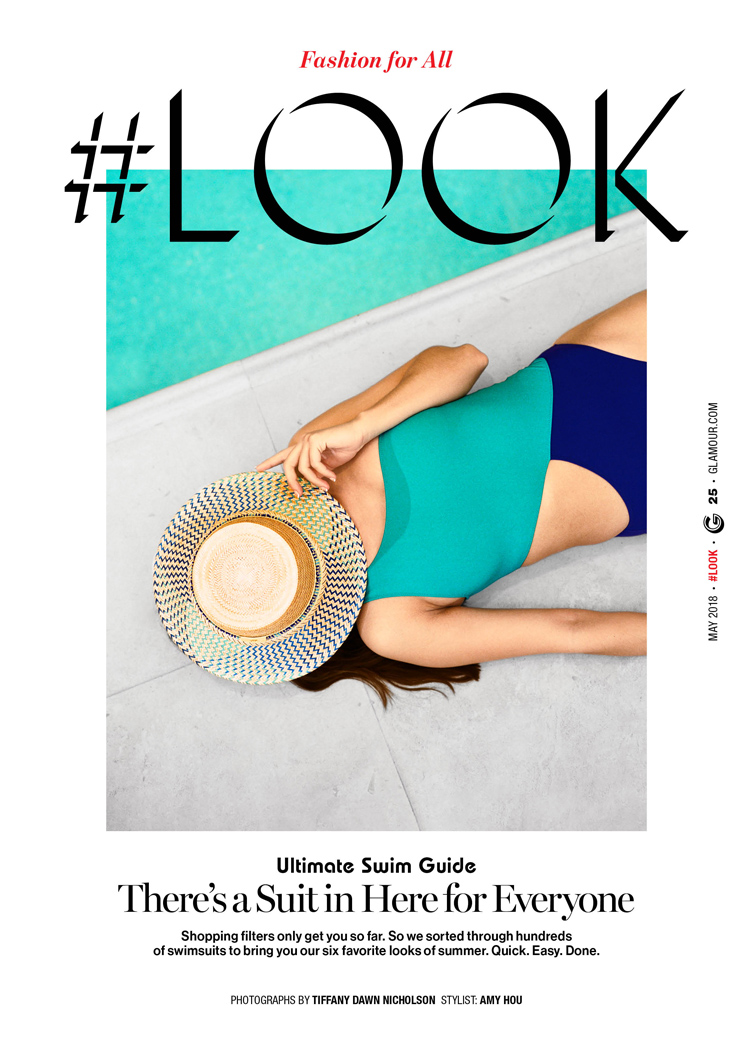 Great ideas sell themselves… or do they?