Most people’s first exposure to robots was through sci-fi movies like Blade Runner and Star Wars or else with a kid’s toy that invariably broke after a few weeks’ use. And while technology, and robotic advancements, affect our daily lives more than ever — often in ways that aren’t obvious — we might still think of robots in these simplistic terms.

But an exhibition at V&A Dundee encourages visitors to look at robots and humans’ relationship with them in an entirely new way. Kirsty Hassard, curator at the museum, says that the focus of the exhibition is how design is a “mediator” between robots and people.

“It looks at the ethics and philosophy behind robotics, how it’s changing our lives at the moment and how it will change them in the future,” she adds. “It looks at it in a completely different way than exhibitions on robots have previously.”

Originally held at the Vitra Design Museum in Germany, the exhibition has been “enhanced and adapted” by East London-based design consultancy de Pass Montgomery. The displays have been adapted for V&A Dundee’s bigger galleries, for example. The Scottish museum is the first, and only, venue of the show in the UK.

Hassard says one of the main departures from similarly-themed exhibitions is how Hello, Robot is “thematic” rather than “chronological”. It is divided into four sections; the first looks at our past fascination with robots and is displayed traditionally like a “cabinet of curiosities”. There are film posters, such as 1926’s Metropolis which includes one of the first robots ever depicted in cinema, as well as props: an R2-D2 model, the much-loved droid from Star Wars Episode IV: A New Hope. 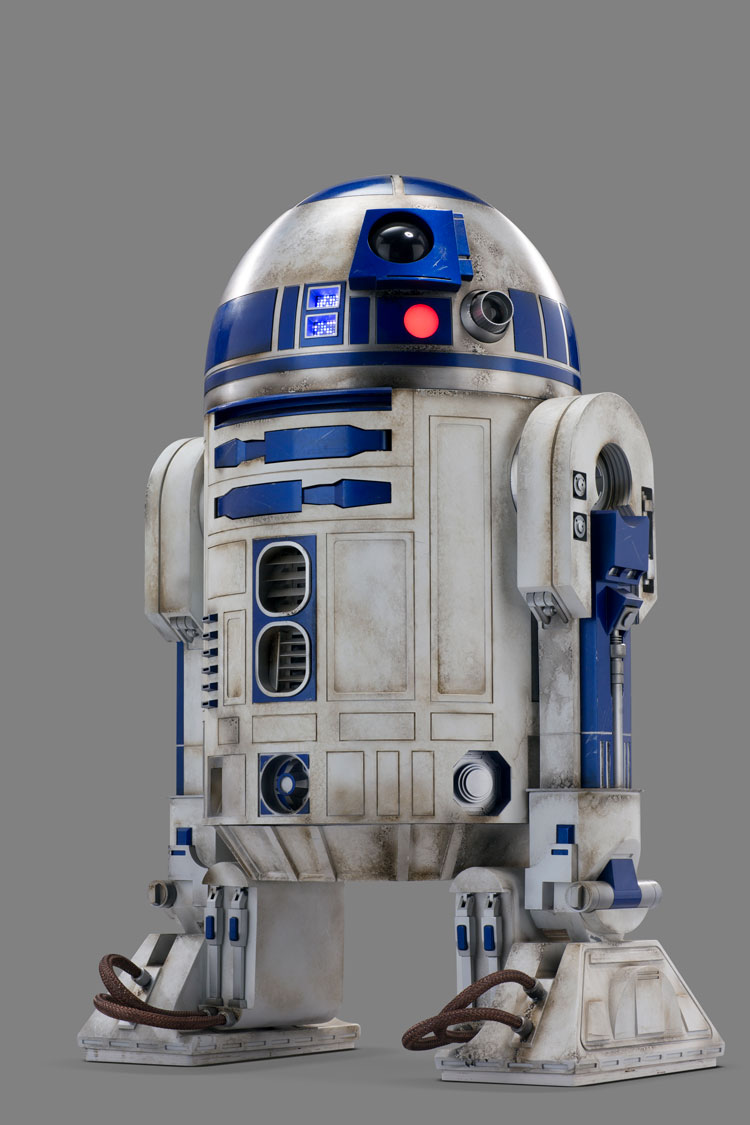 The second is made to look like a factory floor, playing with the idea that robots might be able to complete jobs. YuMi, a robot designed in 2015 can work alongside people to complete repetitive tasks and ease the burden of human workers. This is not supposed to scaremonger, Hassard says.

In contrast, the third room is made to look “fleshy”, Hassard says. Its “pinky tones” are supposed to make visitors think about how robots interact with humans. The fourth section is based around humans and robots coming together, so the look is more “futuristic”.

Can, and should, robots live alongside human beings?

One of the Hassard’s highlights is Dan Chen’s Friend 1 (2015), which is a reaction to another robot in the same room of the exhibition: Paro, the therapeutic seal (2001). Paro is a cuddly seal, more teddy bear than robot, but it’s high-tech: its sensors react to light, sound, temperature and touch. It’s used to comfort elderly people and patients with dementia.

Chen’s machine, a desktop robot, which looks far less cute. Its arm pats a patient’s hand and speaks phrases like “It’ll be alright”. The less comforting approach is purposeful: Chen is questioning whether robots can take the place of loved ones during a human being’s final moments.

This duality is indicative of the exhibition, which asks questions rather than dictates. “The exhibition is supposed to challenge you, and make you think,” Hassard says. Throughout the exhibition, visitors are prompted with questions, like whether robots can have feelings or how they feel about being dependent on “smart workers”.

Part of this questioning is achieved through the exhibition’s interactive features. Kip, from Guy Hoffman and Oren Zuckerman, is a robot that resembles a CCTV camera, which uses physical gestures to respond to sound around it. If a human’s tone is friendly, Kip moves forwards and shows interest — just as a human might. If someone uses a harsher tone, Kip will retreat and tremble.

It also plays on human emotions, such as the speculative design project, Raising Robotic Natives (2016). Conceived by Stephan Bogner, Philipp Schmitt and Jonas Voigt, the Baby Feeder fits a standard baby bottle and could feed a baby, thereby saving parents around half an hour per meal.

“The more and more as you go through the exhibition,” Hassard says, “the idea it puts across is that robots are in everything, and that robots can be anything. Whether it’s fashion, furniture, design, or medicine, the idea is that robots cross all different parts of your life.”

Hello Robot. Design Between Human and Machine runs from 2 November 2019 – 9 February 2020 at V&A Dundee. Tickets cost £12. For a full range of prices, visit the website.