The role of the office in the workplace has been called into question this year. While many have enjoyed the benefits of working from home — no commutes, greater flexibility — some have missed the office atmosphere and camaraderie.

Now, as the return to offices becomes a reality for more people, the question about its place in the world of work is in focus once more.

Design consultancy Seymourpowell has come up with a “third space” that aims to combine the benefits of remote working and office life. 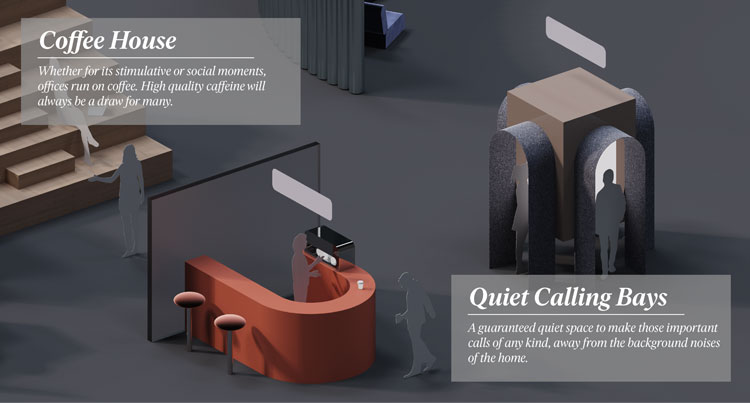 Seymourpowell design strategist Emma Caselton tells Design Week that the concept has resulted from the studio’s insight into working patterns and preferences.

While 50% of respondents to its 66 Days of Change survey said they wanted to work remotely more often, 29% also said that working from home was one of the greatest challenges of lockdown life.

Caselton, who works as part of a foresight team, cites the daily interruptions to workflow as part of the reason for these challenges. One example that may be familiar to many at the moment: the number of parcels that people receive during work calls and meetings.

The studio’s Work/Shop concept fuses a co-working set-up (like WeWork) with a retail space. As the studio notes, physical shopping has taken a hit during the pandemic and the sector was already in the shadow of its online counterpart. Amazon, for example, has flourished during the lockdown.

The idea is that these types of workers could be a new target audience. In Seymourpowell’s “third space”, there could be coffee shops or other retail start-ups. Caselton hopes that these would feel less forced than some of the ones that are set up in current co-working spaces, which are predominantly in the city.

Part of designing a solution to this means including the office conveniences that people may have taken for granted before — a reception to accept packages and a printer for big documents, for example. 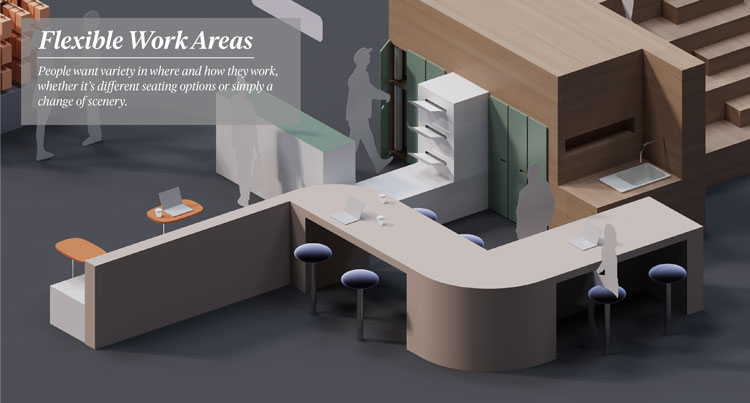 The concept does resemble a WeWork, and while there are some differences, Caselton notes that WeWork spaces work. This leads to a key difference for Work/Shop — that these spaces could exist outside of cities. While spaces like WeWork are often located in the inner city, more remote working does not necessarily need to be.

There has been discussion about “de-centralised” workspaces and Caselton highlights this as a benefit of this kind of space. The “cross-contamination” of ideas possible at a more localised office could create a more community-focused atmosphere. “The community at these places could actually be more valuable than the space itself,” she adds.

The results of the 250-person survey also showed that while many thought the commute was a waste of time, some found it useful as a way to decompress and to register a change in home and work settings. Locating professional environments closer to where the majority of people live (in suburban areas, for example) could be a way around this.

This set-up could also be helpful for those who do not own their own homes and are finding it more difficult to adjust to working from home. It is not so easy for renters to change their domestic environments for a better work-life balance, Caselton adds.

“Lots of light and lots of air”

When it comes to the actual design of the office, Caselton says there needs to be lots of light and lots of air. There will have also have to be a lot of space for people to move around in and “not feel boxed in”. Caselton adds that many suburban retail spaces — potential venues for the Work/Shop concept — have a significant square footage.

While these concepts are a long way off, there might be an opportunity to create a more adaptable office design too. “Urban offices used to be set up to cram in as many people as possible,” she adds, “but we need to reverse that thinking now.”

Earlier in the year Design Week reported on the ways that VR could change how designers work. Seymourpowell uses a technology called Reality Works which allows designers to sketch remotely. While this opens up many potential avenues for work, the technology is expensive and smaller studios may not be be able to afford it.

While highlighting the possiblities of Reality Works, Caselton suggest a future in which this technology would be available at this co-working space. “The really interesting thing about the future of office space will be with the kind of equipment that you just can’t have at home or can’t afford at home,” she adds.