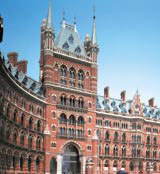 Design groups are set to benefit now that planning permission has been granted for a £150m restoration and refurbishment of the Grade I-listed St Pancras Chambers in London’s King’s Cross.

Under plans by property developer Manhattan Loft Corporation, the former Midland Grand Hotel at St Pancras railway station will be regenerated to include a five-star Marriott hotel with a host of bars, leisure facilities, function rooms and new apartments.

While the project remains at the architectural stage, a spokeswoman for MLC says that designers may be brought in later in the year, when the apartments are launched to market in June.

Architects RHWL and Richard Griffiths Architects will work alongside the London Borough of Camden, English Heritage and The Victorian Society to restore the Sir George Gilbert Scott-designed building. The original Gothic structure will be retained, with a ‘sympathetically designed’ hotel extension added to the rear.

The Chambers building sits alongside a 23ha site set for a mixed-used regeneration, under the King’s Cross Central masterplan from Allies & Morrison, Porphyrios Associates and Townshend Landscape Architects. This is being overseen by developer Argent and London & Continental Railways, which controls the Chambers building and much of the surrounding land.

The catalyst for these developments is the creation of the Channel Tunnel Rail Link, which will bring a high-speed Eurostar line to an overhauled and augmented St Pancras station in 2007.

Around 20 architects have worked on preliminary design proposals in order to aid the planning stages, says Roger Groom, LCR development director for the King’s Cross Central scheme. These include wayfinding, signage and branding and they will pave the way for more extensive design consultation.

‘We’re at the outline consent stage at present, but many of the architectural practices involved have been working on design solutions, to satisfy Camden council the plans are sound,’ says Groom.

The council is expected to give consent to the masterplan this summer. If granted, it will move into a more detailed design stage, presenting further opportunities for design consultancies.