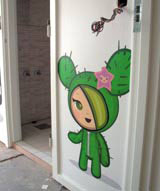 With a competition to run for cooks and staff, and to find designs for a range of bespoke hotel furniture, not to mention organising a three-week calendar of events to amuse 800 visiting journalists (all of whom will stay at the hotel and eat and party at the temporary Studio Fox and Club Fox) Event Labs needed a curator to choose a team of artists to paint each of the 61 rooms.

With a network of graphic designers, illustrators, graffiti artists and eclectic creatives that stretches from Brisbane (Rinzen) to SÃ£o Paolo (Speto), from Miami (FriendsWithYou) to Neasden (Neasden Control Centre), all of whom have featured in one or more DGV publication, the task was to find 21 artists who could deliver up to four rooms each, working under pressure, cheek by jowl, at the same time as teams of subcontractors replacing electrics, bathrooms, carpets and curtains.

Many of the rooms have been treated to one-off, digitally-printed ‘wallpapers’, as designed by each artist. When these were hung an extra layer of hand-embellishment was added; Container of London, renowned for its super-romantic imagery, cut out and layered more drawings, patterns from embossed paper, gold and silver foil. At the other extreme of process, Speto from Brazil painted his graffiti-folklore influenced characters directly on to the wall, with fluid, confident strokes. In the reception area, Pandarosa (Australians on a worldwide tour) created a poured-paint floor, designed wrap-around wallpaper and projected moving visuals that run day and night.

Hotel Fox is an experiment in hospitality set to run for five years, after which the hotel’s owners will take back the reins. At reception you’ll be asked to pick a card, from a ‘Pantone-book’ of illustrative Do Not Disturb signs. Whether you’re after bold humour, cutesy comfort or radical romance, if you like environments with attitude there’s a room here for most tastes, whatever your age. Whether Volkswagen’s car becomes a symbol of a new century or not, Hotel Fox is a daring experiment that deserves to succeed.