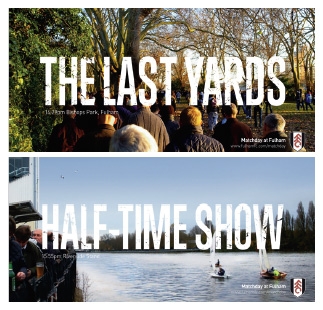 Fulham Football Club has appointed Heavenly as its brand guardian ahead of a brand strategy overhaul. Heavenly has been retained by the Premiership club for strategy and creative services after coming through an initial pitch to develop a creative campaign.

This initial campaign has been designed to ’make the fans feel good about themselves’, says Heavenly managing partner James Fenner. He says the group wanted to convey ’everything but the football’ on match day. ’The commute’ shows fans walking across Putney Bridge, ’The last yards’ shows the walk through Bishop’s Park, and ’Half-time show’ the view from the ground across The Thames at half time.

Heavenly deputy creative director Paul Franklin says, ’We wanted to capture what is unique about Fulham and show that it’s more than just the 90 minutes of a match that are important – it’s the whole experience of the day. The club have some very special nuances and details that are specific to it and we wanted to raise awareness of those and the Fulham brand itself across a wider audience.’

Heavenly is now designing a season-ticket campaign, which will roll out within two weeks and may take elements of the successful match-day campaign, says Fenner. This will be followed by creative work for a membership scheme, a new kit launch, and, says Heavenly, a review of ’the overarching club brand, though there are no plans to review the club’s crest’.

The group is working to express a tone that will ’generate warmth for Fulham’ and ’atmosphere and spirit’, according to Fenner, who says the club will be pitched as an antithesis to its rivals with an emphasis on its heritage and history, as the club is the oldest from London in the football league.

The entire Fulham brand is potentially under review, including the stadium brand and all touchpoints for digital and social media.