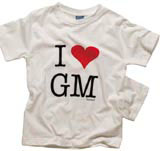 Howies, ‘Cardigan Bay’s third biggest clothing company’ and the T-shirt world’s answer to Innocent Drinks, is claiming something of a first this week. It has produced a limited edition T for lovers of GM food, despite all the evidence that such folk are the rarest of breeds.

‘It may not fit them at first,’ says Howies founder David Hieatt of the three-armed garment. ‘But they will grow into it.’ The company has printed 90 shirts – ‘more than enough to clothe all those in favour of GM food in this country’ – and pronounces itself ‘delig

hted’ by sales that can be ‘counted on two fingers’.

More drollery, and some nice organic clobber, can be found in the latest Howies catalogue, designed in-house by Sy-Jenq Cheng, or on-line at www.howies.co.uk.

Just make sure you don’t contact them on a sunny day, because they’ll be ‘out there doing what we love’ – ‘leave a message and we’ll get back to you in a while’. If only we could say the same.