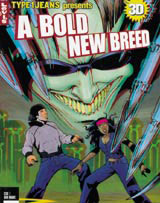 Levi’s will unveil giant 3D comic posters later this month in the windows of department stores including House of Fraser and Debenhams, to promote its Type 1 jeans. The displays, designed by The Kitchen, are inspired by an adventure hero-style comic book (cover and spread pictured) produced by Levi’s ad agency BBH, storyboarded by The Kitchen and drawn by comic artist John Higgins. The comic book, complete with 3D glasses, will be available in Levi’s stores from later this month. The work was led at The Kitchen by creative directors Rob Petrie and Phil Sims.