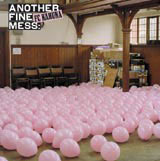 Brighton-based Red Design has created artwork for compilation album Another Fine Mess by FC Kahuna for Azuli Records/Whoa Music. The album is the first in a series of four to be designed by the group. Both the tunes and art direction aim to capture ‘the energy and eclectic musical styles of an impromptu house party round your mate’s house’, says Red Design founder Ed Templeton. The concept for all four compilations is based on ‘a simple visual joke which would lose its appeal if explained’ and aims to capture the ‘raucous nature of a good night out’, he adds. Another Fine Mess was released last week.