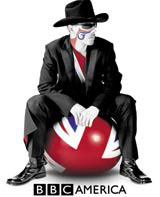 People unlucky enough to be watching Saturday night TV this summer might find themselves subscribing to Bruce Springsteen’s view that ‘there was 57 channels and nothin’ on’. For designers, however, broadcasting – in all its multi-channel glory – is still an expanding medium. And one that offers plenty of lucrative work.

The BBC finalised its 28-strong design roster last week after two years in the making (DW 31 July), though some industry sources suspect the exercise was not much more than a ‘beauty parade’. Given the corporation’s clout in the British market though, roster status should be a nice little earner.

But the flipside of the BBC’s dominance of the domestic market is the falling revenues of UK commercial players. Increasingly, broadcast designers are discovering that many profitable opportunities lie overseas and there is a steady stream of demand for British designers abroad.

Kemistry is clocking up the air miles with projects in Holland and Romania (DW 5 June and DW 26 June), while Bruce Dunlop & Associates and Venturethree provided on-air design and branding respectively for Sky Italia (DW 1 May).

The BBC’s burgeoning international brand, BBC Worldwide, is planning a number of channel launches outside of the UK. The corporation cites its BBC America channel as a successful example of its strategy. The channel launched in 1998 and now reaches over 34 million homes.

But which markets offer the real opportunities for British-based designers? What are the reasons for their success overseas? And is it fair to say the domestic market has reached maturity?

Kemistry didn’t make it on to the BBC roster and creative director Graham McCallum regards the British scene as ‘a bit stuck’, which is probably why the group has set its sights on Europe.

McCallum says the greater sophistication of UK moving image design – over many years – creates the demand for ‘our particular expertise’ on the Continent.

Public sector broadcasters – like Kemistry’s Dutch client Publieke Omroep – ‘grew up with the place to itself’, McCallum explains, but now it faces increased competition. Although homegrown design talent is emerging, ‘traditionally, there has not been a forcing house’ in Europe to lever up standards.

According to McCallum, ‘Channels live in the breaks between programmes. That’s where they have their existence. [Broadcasters should] see it as a journey from programme A to programme B because everyone lifts their zappers at that point.’

Overhauling such brands also requires ‘a broader analysis of the whole performance of a channel and how it’s experienced everywhere,’ says McCallum. ‘It’s not just about the design side, but the actual structure of these organisations. We’re not just repositioning, but reorganising as well.’

‘A lot of these things can become quite political,’ he adds, referring to the implications of British groups holding sway over other national broadcasters.

‘To take Sky Italia as an example. Italy’s not very organised and what we’re trying to provide to all our clients is a system that works on air – not only an identity, but a design where everything reminds you that you’re watching that particular channel.’

Dunlop is considering setting up an office in Munich, not only for a push on the German market, but also further east. ‘Russia is coming out of the dark ages,’ he says. ‘Guys that had a coal mine have now bought a TV channel.’

Eastern Europe is ‘definitely coming alive’, McCallum adds. Next year, a clutch of countries including Poland, the Czech Republic and the Baltic States join the European Union. And Bulgaria and Romania will be knocking on the door in 2007.

Nascent markets offer British designers enticing opportunities. Through-going projects, which can become as detailed as advising on the tone of newsreaders’ scripts and what presenters should wear, are exciting briefs. But is McCallum right to suggest the UK is currently less open to ‘innovation and fresh thinking’ than Europe?

Although Dunlop believes larger channels tend to be more conservative, he does not think the UK is less receptive to new ideas.

‘Some channels have less to lose by taking chances,’ he says, citing the Hallmark channel and BDA’s current work on Flextech’s relaunch of Challenge.

Natural Associates managing director Nick Boyce, who has worked on off-screen collateral for BBC Worldwide and Turner, maintains that ‘niche segmentation of television audiences’ is the name of the game.

‘It’s about getting new channel streams out of existing programming,’ he says. ‘Brand partnerships and tie-in brand alignments are becoming more important.’

The objective is to create a ‘complete channel package’, with inspiring brand values, that can ‘transcend specific platforms and media’, he adds. With BBC Food, for example, ‘the individual chefs usually have their own brand image.’

Nevertheless, there is the sense that the UK market is on pause until later in the year, when the Carlton-Granada situation is clearer and the laws on media ownership are relaxed in December. The BBC charter is also up for renewal in 2006.

In the meantime, it looks like opportunities lie in Eastern Europe and other emerging markets. From totalitarianism to media proliferation in a little over ten years, their broadcasters are certainly playing catch-up. Very soon, and with some UK design input, they may be going for gold.