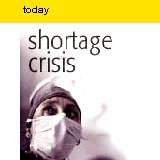 Public sector workers are being targeted by insurance company Eagle Star with a series of dedicated “E-Community” websites under its generic “Justfor” brand, designed by London digital group Circle.com.

Justfornurses.co.uk launches this week, targeting the profession with a lifestyle-led website where nurses can discuss topical issues on-line and access relevant news, as well as take “time out” to read lifestyle features.

“The [Justfor] sites aim to add value to Eagle Star’s core market – public sector workers – by providing professional advice to help them in their jobs as well as more consumer-led articles,” says an Eagle Star spokeswoman.

Justfornurses follows the launch in July of portal justforteachers.co.uk. If successful, the format may roll out to Eagle Star’s other key insurance markets in the public sector, including firefighters, doctors, local Government workers and civil servants.

Eagle Star branding also appears throughout the new website, and the portals aim to engage with Eagle Star’s core audiences as well as educate them about products and services, adds a Circle.com spokeswoman.

The annual review is read by around two million Abbey National shareholders and forms a key element of its investor communications, says a spokeswoman. “We have asked design groups to pitch for the work every year to bring in fresh ideas,” she adds. The annual review will be launched in March.

Stand up to gremlins