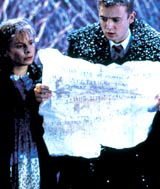 As we talk, Anthony Ward is upholstering some gilt dining chairs. Well, actually, he’s painting the seats pale turquoise. It’s a fiddly job because they’re only 5cm high. They are for the model set of the National Theatre’s forthcoming revival of My Fair Lady, his work in progress.

Ward is just about the hottest stage designer around at present, having won a prestigious Olivier award last year for Oklahoma!, which was also produced at the National. He had an extraordinary run of success at the Royal Shakespeare Company, including The Lion, The Witch and the Wardrobe, currently revived in all its enchantment at Sadler’s Wells Theatre in London, and the new RSC family show, The Secret Garden, based on the children’s classic.

To hear him talk, you’d never guess Anthony Ward was at the top of his profession. Though genial enough on the surface, he is curiously diffident, palpably stressed out and disarmingly honest about his achievements, or perhaps he is just his own worst critic. When I mention the hugely successful revival of Oliver! in the mid-1990s, he pulls a face, as if to say he’d rather not discuss it. But it was a great piece of popular theatre, I protest. “Hmm, not really representative of my work,” he mutters. He would rather talk about his 1990 Troilus and Cressida for the RSC, which proved to be a stepping stone both for him and its director, Sam Mendes, who went on to make a small fortune directing Oliver! for Cameron Mackintosh, and, more recently, the film American Beauty for Steven Spielberg.

Ward was instrumental in making Troilus a notable RSC debut for Mendes. Together they re-invented the play with a satirical blend of ancient and modern costumes, props and artefacts, incorporating everything from Anglepoise lamps to black leather jackboots. Prior to that, Ward had worked a lot in the provinces, notably with hot director Phyllida Lloyd, first at the Bristol Old Vic and then at the Royal Exchange, Manchester, which he didn’t much like because it’s theatre-in-the-round and therefore limited in its scenic design possibilities.

Ward says he knew he wanted to be a stage designer from the age of 15. “I grew up near Stratford-upon-Avon and I loved all that intricate Elizbethan stuff from a very early age. The irony is I’ve never really done a costume drama of that period.”

His roll-call of RSC shows – A Midsummer Night’s Dream, King Lear, The Winter’s Tale, Artists and Admirers, Troilus and Cressida, The Tempest – includes some of their most acclaimed hits of recent years. Many of them have been directed by Adrian Noble, the RSC’s artistic director. “Noble opens my mind to a lot of possibilities and helps me to catch ideas that are floating in the air. I don’t always agree with him at first, but we can always find a way of accommodating each other’s view,” says Ward.

For his part, Noble attributes to Ward a major hand in creating the RSC’s visual identity in the 1990s. “His designs for the late plays – The Winter’s Tale, Cymbeline, and The Tempest – were astonishing. He’s very sensitive to the inner life of a play, and he understands theatre space,” says Noble.

“It’s important for a designer to have a sense of poetry, which Ward does. You learn each other’s strengths and develop a kind of shorthand while working together,” he adds.

Noble used Ward again when he made a film version of A Midsummer Night’s Dream in 1996. The film turned out well, but it wasn’t a happy introduction to celluloid for the designer. “I didn’t take to film at all. It’s well paid and you get your own parking space, but it’s like one long technical rehearsal and I’ve never enjoyed ‘tech-ing’ shows,” says Ward.

“Theatre is very much a team thing, whereas film is a director’s medium. The designer on a film is more of a manager, he has very little influence at the end of the day,” he adds.

Disillusioned by that experience, Ward dropped out for six months and took up painting. “I just felt I wanted to do my own thing for a while without having to rely on other people,” he says. “But self expression on any meaningful level is a huge Everest to climb and most of it finished up in the bin. I realised after about six months that what really turns me on is creating pictures in three dimensions, things that evolve through a process of collaboration.”

So it was back to the drawing board and a new challenge – opera – which provided an opportunity to take his talents overseas. Inevitably for Ward, foreign assignments are a mixed blessing.

“I know I have to be less parochial, having only worked in the UK for so long, but the problem is that you get used to working with the same painters and craftspeople at home,” Ward admits. “I find the whole thing of communication abroad very difficult. I can’t begin to tell you how bad my French is, so when I did Manon Lescaut in Paris, the people I was working with very soon told me they could understand me better if I spoke English.”

It wasn’t helped by the fact that he had terrible problems “finding a visual language” for the opera. “I always get paranoid in the early stages of any job, when I’m staring at an empty model box, trying to work out how I’m going to fill it. But on this one I just couldn’t make it work,” Ward explains. “I was reduced to tears. I did manage to think of something eventually and, luckily for me, the director found it inspiring and we worked it out from there.”

Is the process always that painful? “No. As I’ve got older it’s become more of an organic process, not so reliant on that blinding moment of inspiration,” says Ward. “Earlier in my career it was often a question of time, or lack of it. There is more time now. On My Fair Lady, for instance, Trevor Nunn [the director] and I decided very early on that there would be no major technology, but there would be this basic metal structure to accommodate all the sets.

“It’s not that we’re breaking away from Cecil Beaton’s prototype out of disrespect for the piece, we’re just trying to find a new way of looking at it,” he explains.

Ward also worked with Nunn on the highly acclaimed Oklahoma!, which proved to be the National’s most successful musical since Guys and Dolls. Ward’s scenic exploitation of the notoriously difficult Olivier stage was unforgettable. “It was essential to have a feeling of wide, open space and the Olivier was the perfect space for it – that great expanse of floor to represent the land, then a great expanse of back-projected sky above. It was so simple, yet so effective. Trevor wanted it to look very real, but at the end of the day I had to create a floor that they were going to be able to dance on, so we bought up acres of olive wood veneer. It was scarcely the soil beneath their feet but it looked rustic enough,” says Ward.

Stage designers have to tread a fine line between their own high standards and what’s practicable. “I’m always having to tell myself to calm down and let go,” says Ward. “You can drive something into the ground and lose sight of the whole [thing] if you don’t know when to let go. I know there is a point where you’re going to drive everyone barmy if you don’t stop. That’s not to say I don’t sit there on opening night, thinking ‘That’s still not quite right’. It happens on almost every job I do.”

The Lion, The Witch and The Wardrobe continues at Sadler’s Wells Theatre London until 28 January. The Secret Garden is at the Royal Shakespeare Theatre, Stratford, until 27 January.

Stand up to gremlins

Mis-using sound can be negative for brands