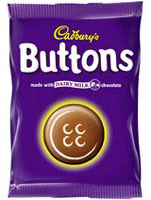 The £42m a year brand is primarily aimed at preand primary school-aged children. However, 42 per cent of sales are to adults to give to children. The relaunch is designed to make the brand more accessible to adults and more permissible for them to buy Buttons for themselves.

The new packs do away with cartoon imagery and the Cadburyland banner under which Cadbury’s youngest brands are grouped. The ‘big design idea’ behind the new look is to make the button the hero of the pack, says senior designer Adam Ellis, who led the project creatively.

CPB has produced ten different packs for each of the three variants (milk and white chocolate and giant buttons) all of which feature a central image of a chocolate button with a gold halo and doodling around it. Each pack also has a line that ties into the illustration and a Christmas cracker type joke on the back.

‘The packs are very collectible,’ Ellis says. ‘and the concept lends itself to limited editions.’

‘You can imagine people buying the birthday pack as a little treat for themselves on their birthdays or kids buying it to give to another kid on its birthday,’ he adds.

The new look goes into distribution this week and will hit the shelves in two to three weeks’ time.

Cadbury has been a CPB client for over ten years. The group won the project without a pitch in March 2001.