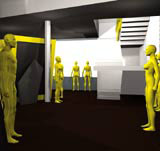 The retailer is renowned for its ground-breaking store design.

The London flagship is scheduled to unveil its first formal designs in mid-April in London’s Conduit Street. It has been open to the public ‘on a temporary basis’ since October 2001, featuring a variety of design and art installations that change month by month.

Wanders’ interiors will be ‘extremely unusual’, says a Marcel Wanders Studio spokeswoman. It will feature gold-coloured mannequins, including a giant Gulliver model, alongside smoked and transparent glass, huge mirrors and one-off furniture pieces designed by Wanders.

Wanders’ studio is investigating options to make the mannequins ‘breathe’, including electronic mechanisms inside the models.

Wanders was commissioned to create the interiors in December 2001 after designing a series of bags for Mandarina Duck, which will be unveiled at the Milan Furniture Fair in April.

Mandarina Duck plans to open stores in Berlin and Barcelona next, working with different designers on each store. No two Mandarina stores are the same.

As well as clothes and bags, Mandarina Duck manufactures diaries, pens, key rings and other personal and desk accessories.