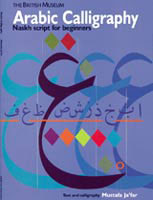 The British Museum is publishing what it claims is the first ‘stroke-by-stroke’ guide for learning Arabic calligraphy.

Published on 4 February, the book is designed by MJ Graphics and written and illustrated by Mustafa Ja’far.

It focuses on one type of script, Naskh, which was used as a utilitarian script for ordinary correspondence in the late 8th century.

It was transformed in the 10th and 11th centuries into elegant calligraphy.

Ja’far is an Iraqi-British graphic designer and artist who has conducted several Arabic calligraphy workshops and demonstrations at the British Museum.