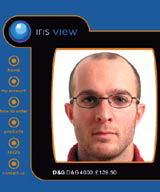 I was interested to read the feature Straight Down the Line (DW 31 January), both as a designer and a frequent on-line customer.

However, the case for clean and easy purchasing is somewhat let down by the fact that as I logged on to the Iris Spectacles (below left) website I was informed that the Internet Explorer/Apple Mac combination was a bit of a no-go, but by quitting IE and firing up in Netscape then I’d get the full effect. Having ignored that warning, the site seemed to work OK as HTML.

A colleague on a PC said that all I was missing out on was some scrolling text. Could it be that this is the sort of hiccup that is simply addressed, but actually could turn away valuable customers?

Of course, it could be

argued I shouldn’t be looking anyway as my eyes are fine, however I almost wish they weren’t, as some of the frames are certainly very pretty.

Nice idea too, to have the frames modelled by ‘normal’ models.