Scottish football club Rangers has been given a new brand identity from design consultancy See Saw, which seeks to modernise the team’s appearance for the “digital era”.

The studio, also based in Scotland, has designed a new crest, bespoke typeface and visual assets for the premiership team. 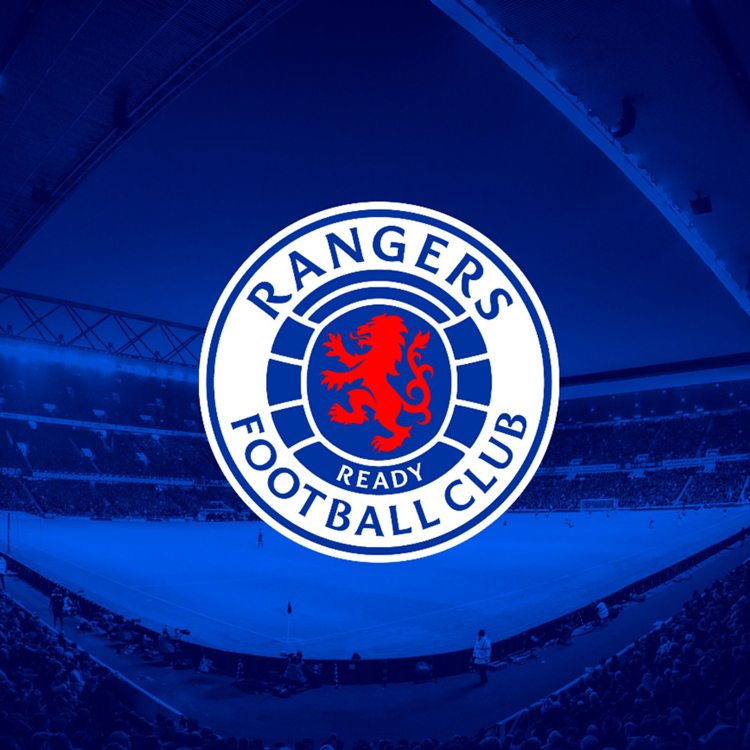 Rangers is based in Glasgow and is the fourth oldest club in Scotland, having been founded in 1872. Its home ground, Ibrox Stadium, was opened in 1929. The club – identifiable by its distinctive royal blue shirts – is the second most successful club in world football, going by the number of trophies. It has, for example, won the Scottish League title 54 times.

However in recent years, the football club has encountered financial difficulties, which came to a fore in the late 2000s. It entered administration in early 2012, owing to substantial debt. HMRC did not not allow the club to exit administration and it entered liquidation in October 2012. This prompted a complicated journey for the team as the administrators were forced to sell the business and assets to a new company.

Because of its status as a new company, many have viewed this iteration of Rangers as a new team. For example, the team lost its membership for the European Club Association. Member clubs of the Scottish Premier League also did not allow the new company to adopt the league membership. Eventually, Rangers entered the league’s Third Division for the 2012-2013 season. The team is now managed by former England football player, Steven Gerrard. 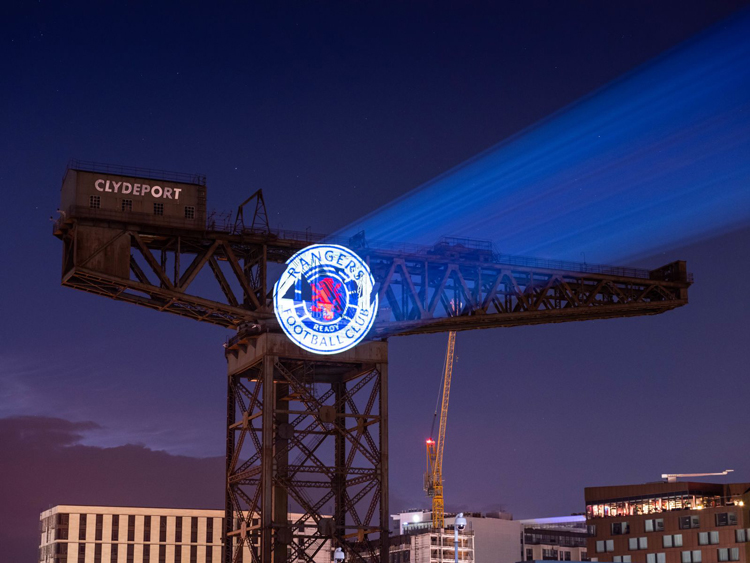 The centre of the new identity work is a refreshed crest. See Saw creative director Maurice Hynds says that the new crest has been “designed to add balance, power and a stronger presence to the well-known Rangers brand”. The updated crest echoes the ‘Ready’ crest that was introduced in 1959. 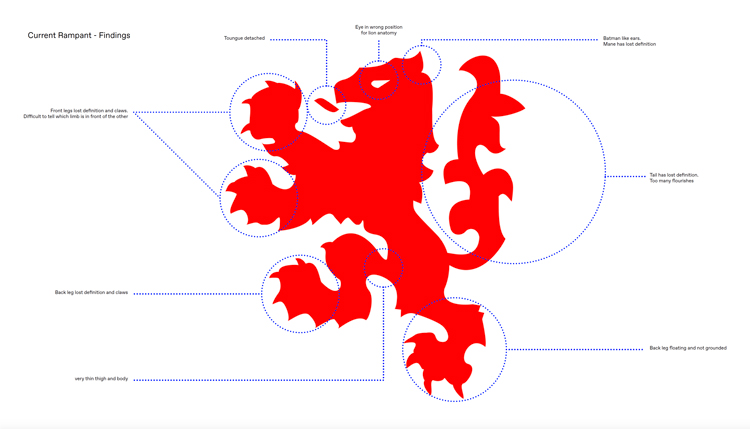 On the crest, ‘Rangers’ now sits in the centre at the top. It was previously positioned towards the lower left of the circle. Syme tells Design Week that it was a top priority to reposition the club’s name; the studio explored football forums where fans had talked about the placement of the name.

“You have to approach the crest with great sensitivity,” Syme says. “For football fans, it’s ingrained with their love of the football club. It’s like a calling or symbol.” 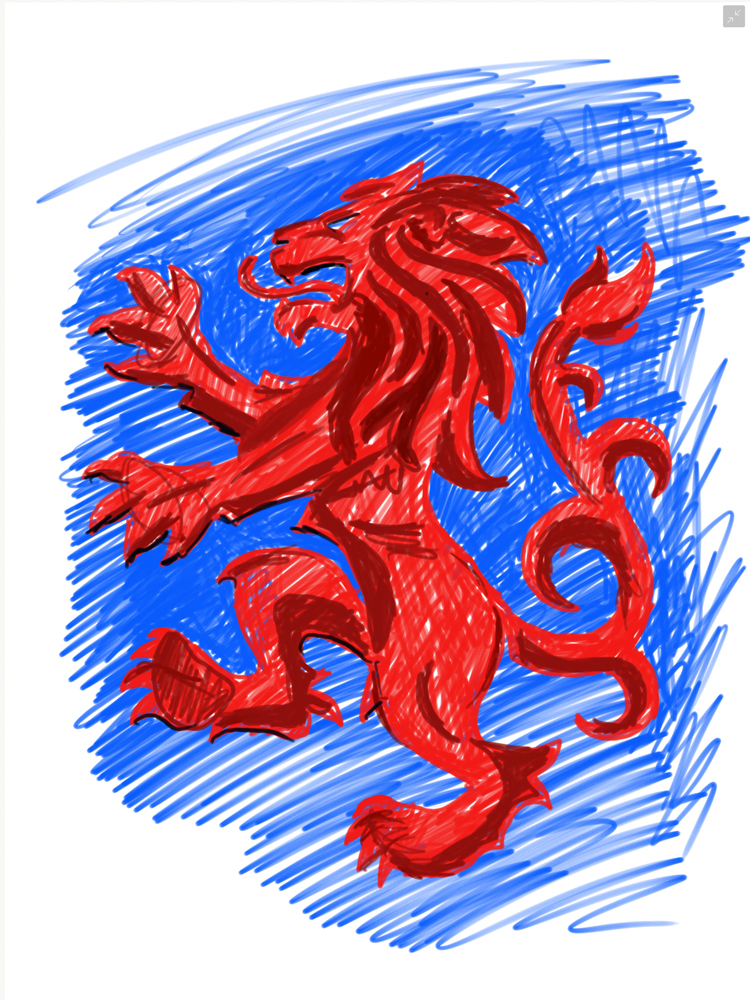 The symbols of the lion rampant (shown above) and leather ball have been “revitalised” and enlarged so that they appear “even more proudly” in the new design. The club says that this “brings a renewed vigour and precision to the logo, while staying true to the courage and history conveyed by the original club emblem”.

Because of fans’ love of the crest, it was important not to change too much. The aim of the re-design is clarity and refinement. The detail of these changes was “astronomical” according to Syme. The word ‘Ready’ previously appeared outside of the circle, which meant that the ball shape was pushed up so it didn’t make a perfect circle. Now that that has been changed, the ball is bigger as well as the lion rampant. The lion rampant has also been “cleaned up” as it had ” really lost its shape” over time, Syme adds. 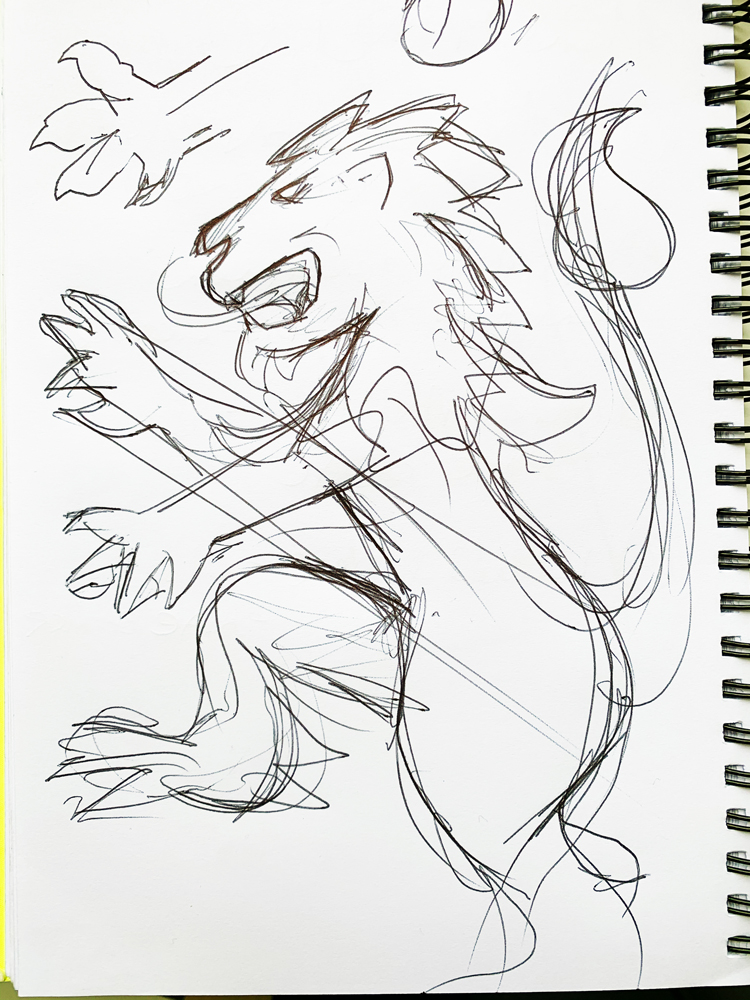 The crest’s blue colour has also been “freshened up” so that it suits digital platforms better. This involved research into the club’s colour history, looking at the team’s football strips. The red also had to be tweaked to more harmoniously balance with the blue so that the tones were not “fighting”. The colour values had to be “absolutely spot-on”, Syme says, so it was tested on digital applications as well as with lithographic prints.

There are now two official crests for the club. The ‘Scroll’ crest remains unchanged, and will continue to be used on the team’s kit. The updated ‘Ready’ crest will be used across club branding and communications. 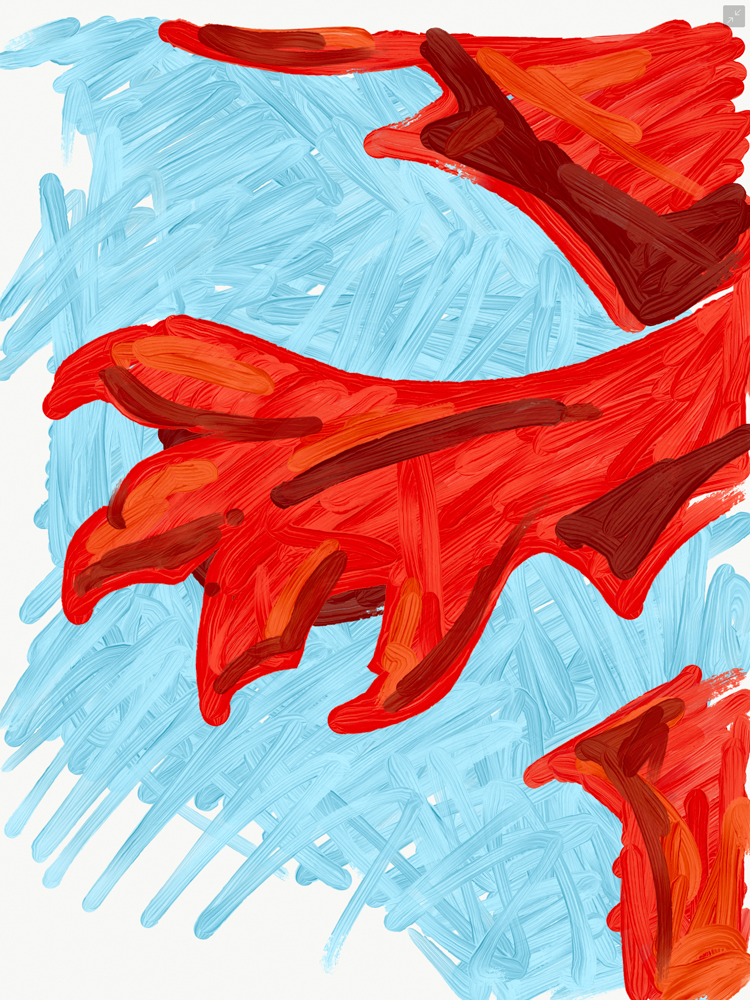 This focus on digital is a core part of the new identity. London-based creative agency We Are Social worked with the team on a set of digital assets which tell the story of the club’s crest over its history, ending with the design that was recently unveiled. Sound is a crucial part of this story-telling, as shown in the video above.

The club hopes that these digital assets “increase fan engagement, international growth and commercial performance”. These assets also include a minute-long film, which can be viewed across the team’s social platforms. The video shown below can be used on Instagram as part of a Story campaign. A new website and app has also been created for the launch. 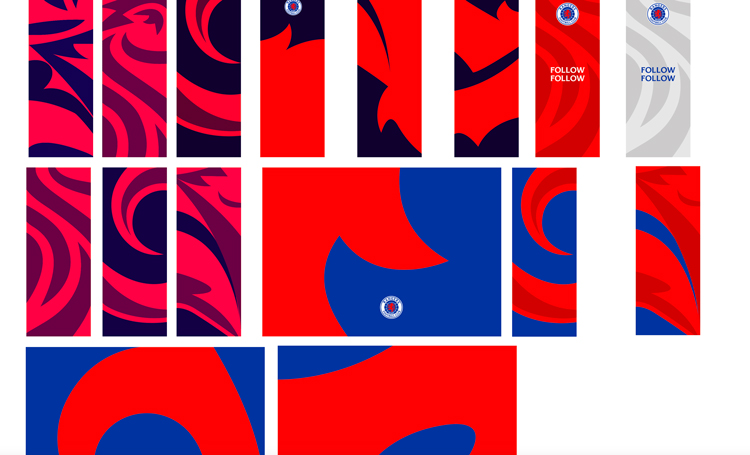 See Saw started the design process in September 2018, and has drawn on the club’s heritage for inspiration. The work involved updating these details in a “forward-thinking” way, Syme says. “The club has such a strong heritage, and we also had to embrace the future.”

While Rangers is known for its distinctive blue colour – which is part of the team’s DNA, the club says – this palette has also been “revitalised” with a focus on standing out in “busy digital environments”.

There is now a “vibrant” ‘True Rangers Blue’ as well as red tones which work as a complementary colour palette. These aim to ensure that the “club’s brand identity stands out regardless of the medium to which it is applied”. 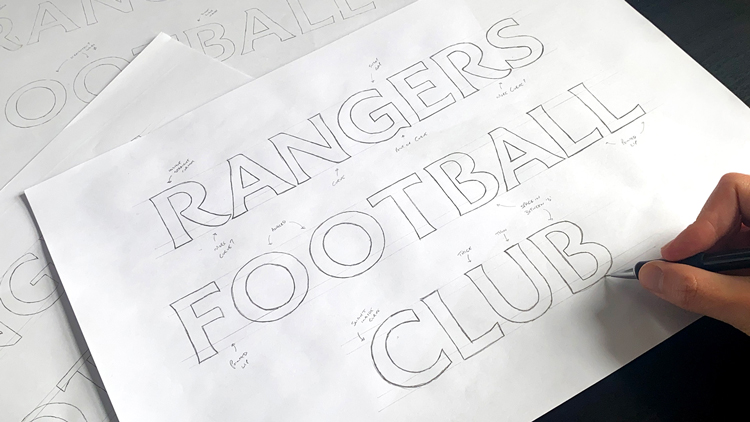 See Saw has also created a bespoke typeface for the club, which appears on the new crest. Working with Scottish typographer Craig Black, the studio has created a “fully functional” typeface with the ambition of “crafting lettering that would resonate with the club’s brand as an elite football club”. It’s inspired by the heritage of the Ibrox stadium.

According to the team, the “timeless” typeface “embodies the history of the club incorporating a modern element that will appeal to a younger generation”. 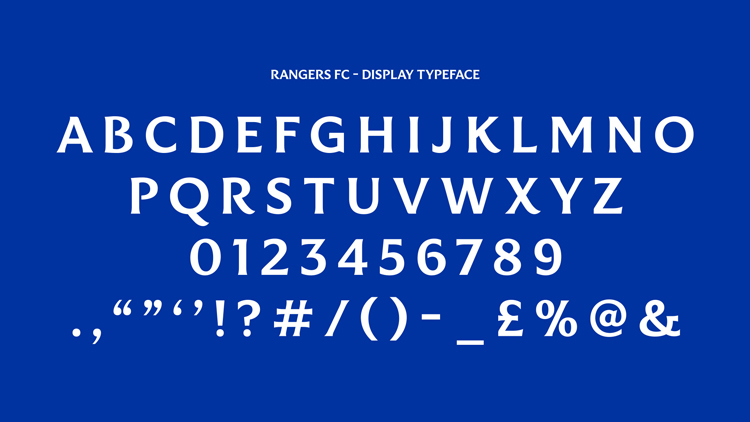 This typeface will be used across the new identity, including marketing, social media, signage to the players’ names and numbers on the back of the football strips.

See Saw has also worked to create a visual system that can work across the club’s brands, from its hospitality sector to its youth football clubs. Some of these have been rebranded – the hospitality brand is now called VIP hospitality, for example – and others have adapted the new crest for their identities. 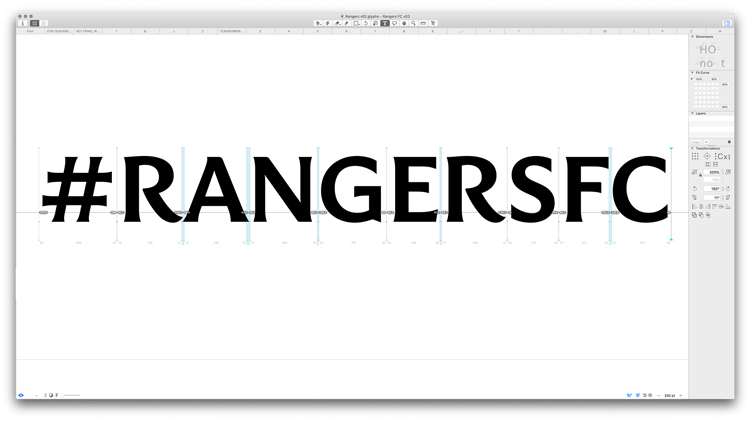 Syme says: “We have retained, restored and re-energised the original visual elements in order to make a transformative impact while remaining true to the club’s historic brand values that encompass historic and pioneering elements.”

To celebrate the brand launch, the new identity and crest were projected across “iconic” locations across Glasgow, including the city chambers and Kelvingrove museum and gallery. 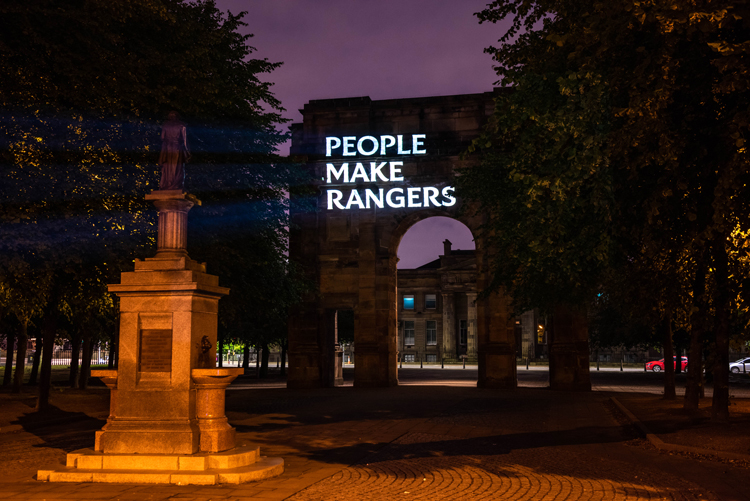